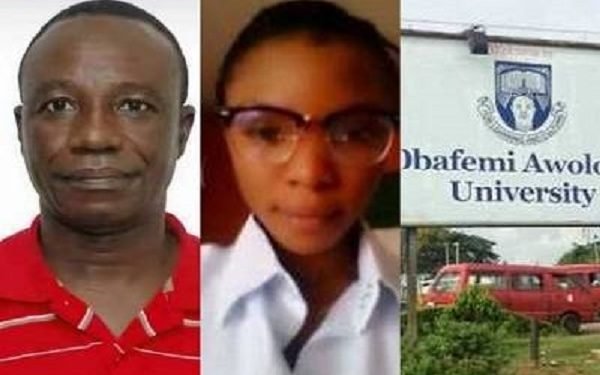 Monica Osagie, the Obafemi Awolowo University (OAU) , Ile-Ife post-graduate student, who was sexually harassed by one of her lecturers, is still seeking justice three years after.

Although the Independent Corrupt Practices and Other Related Offences Commission (ICPC) successfully prosecuted the lecturer, Prof. Richard Akindele, at a Federal High Court, Osogbo and got him sentenced to two years imprisonment, the university authorities have refused to release Osagie’s result.

The ICPC is currently probing the institution’s position on the complainant’s result.

The Nation gathered that in the course of ICPC’s initial investigation of the matter, the OAU Vice Chancellor and other lecturers admitted that Osagie passed the disputed course for which Akindele demanded sex.

The university claimed it did not release the result because Osagie did not register “for the session” on time.

OAU also claimed that since Monica did not register ‘on time’, she was not a ‘bona fide’ student of the university.

The ICPC probe revealed that ‘the student” (same girl) paid all prescribed fees for the session and OAU accepted the payment ‘before the sex for marks scandal’.

The commission was also able to confirm that Monica attended lectures till the sex-for-mark scandal broke out.

It was however learnt that some management staff and lecturers ganged up to influence the ‘decision’ (Senate) of the university to declare that Monica was ‘not a registered’ student of OAU.

Read Also; Randy lecturers almost frustrated me, says First Class graduate
Akindele, a professor of Management Accounting, was jailed by Justice Maureen Onyetenu for 24 months in December 2018 for soliciting for sexual benefit from the female student to pass her in his course.

He pleaded guilty to four counts filed against him by the ICPC.

Akindele completed his jail term last year and was subsequently released, but the university is yet to determine the fate of Osagie, the victim of the sex-for-grade scandal.

According to findings, ICPC is shocked that despite the admission of the OAU Vice Chancellor before its investigators that Monica passed the course in question, the university has not “done justice to the post-graduate student by releasing and confirming her results.”

Investigation by our correspondent revealed the details of how the scandal came about and what transpired between ICPC and OAU Vice Chancellor.

The brief revealed the following: “The student (affected girl) was a master’s degree student.

“ICPC investigation discovered that the victim actually scored 45 per cent, which is the threshold of pass in the affected course in the university.

“But the lecturer, who handled the course, one Prof. Osotimehin, miscalculated the score at 37. On one side of Monica’s script, Osotimehin computed her total score at 45 and on another part at 37.

“When ICPC discovered the error, Osotimehin was invited, and in the presence of the Legal Adviser of the university, he begged and apologised that it was a mistake. He admitted the student’s score was 45.

“So, the course Monica took, which they claimed she failed was that of Prof. Osotimehin.

“ICPC invited Osotimehin, he saw the mistake and he admitted the error before an investigating team. ICPC also invited the university’s VC, who came with the institution’s Legal Adviser.

“The essence of inviting the VC was to make sure that the victim gets justice since a wrong score was given to her.

“When the VC was at ICPC, he saw the error and admitted it. He said OAU would look into it.”

A reliable source told The Nation that OAU was yet to correct the error over the last three years.

The source claimed that Monica was yet to graduate for “blowing the whistle on sexual harassment by Prof. Akindele.”

Continuing, the source said: “The VC said the university Senate has taken a decision that the girl was not a registered student of the school because she did not register on time.

“Investigation traced Monica’s records and discovered that the female student paid accruable school fees, attended lectures, registered for eight courses and passed seven except for the sex-for-mark course among others.

“The university did not refund all the fees and it also did not write Monica to decline her registration as a student.

“The VC said whatever was the outcome of ICPC, OAU Senate has taken a decision that she was not a student of the institution.”

Asked of the next step, the source said: “ICPC may send a comprehensive report to the Visitor of the university, President Muhammadu Buhari. This corruption cannot be swept under the rug. There must be justice for the female student.

“Any sexual harassment case investigated by ICPC amounts to nothing if the victim does not get a sense of justice. It means the Commission has wasted its time.

“In fact, during a recent webinar on sexual Harassment, with the collaboration of OAU and attended by Vice President Yemi Osinbajo, posers were raised on whether or not the girl has got justice? Participants wanted to know if the female student had eventually graduated or not.”

Responding to a question, a source in the know explained another dimension to the case which indicated how the university management was complicit.

The top source said: “The university management was complicit because it did not do what it ought to have done for about three months after the allegation was reported to the Management, long before the audio recording was released online.

“In a statement Akindele made before ICPC, he said the VC instructed/advised him to go and apply for his ‘two years accumulated sabbatical leave’ so that he would go away and by the time he comes back, the whole noise would have died down.

READ  Photos From The #EndSARS Campaign Protest In Abuja, Lagos And Ibadan

“Investigation confirmed that some meetings were held at the VC’s Lodge and certain instructions were given. Although the VC denied knowledge of any such meetings, Akindele and Prof Osotimehin admitted attending meetings with the VC on the matter.

“We believe the OAU decision on Monica was premeditated to protect Akindele and punish Monica for what some lecturers described as ‘ridiculing OAU’. We also hope the Visitation Panel to OAU will address this case of Monica.”

He said: “Do you get result for an exam you did not sit for or are you talking about certificate? Or do you get certificate when you have not completed all other requirements expected of an academic or somebody who wants to get that particular degree from a respectable university like ours?

“She knows; let them ask her.”