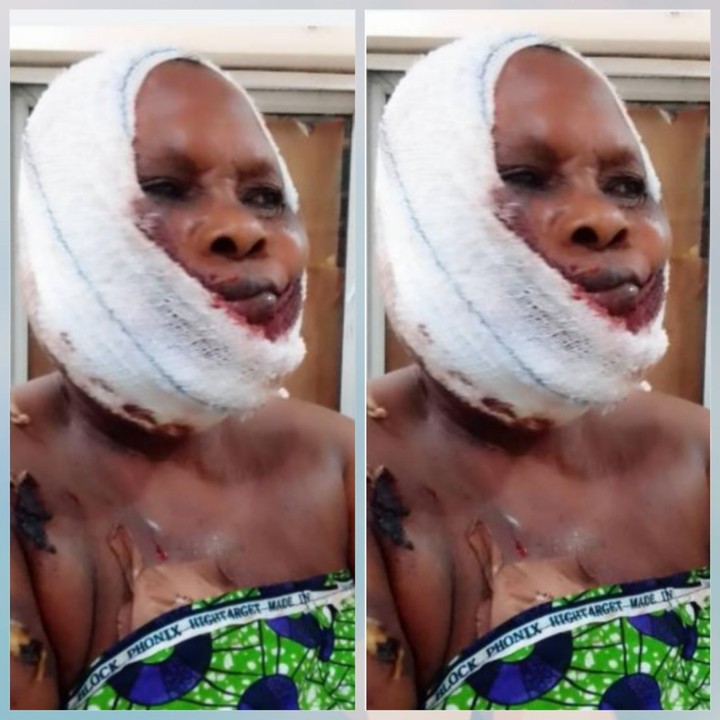 Some suspected Fulani herdsmen have reportedly shot a woman, Morenikeji Salami, in the head while she was on her way to her site in the Ijebu-North Local Government Area of Ogun State.

The woman’s injuries were captured in a video that went viral on Saturday, The Punch reports.

The attackers numbering about eight reportedly emerged from the bush, cut off one of her fingers and shattered her jaw with bullets.

Salami was said to have run into some herds and attempted to make a quick reverse but was caught and attacked.

In the over four-minute clip, the woman was seen being treated in a hospital, writhing in pains as a nurse attended to her.

The victim was said to have been taken to a few hospitals including the state-owned Olabisi Onabanjo University Teaching Hospital but was rejected.

She said she had to travel to the Lagos State Hospital, Ikeja, before she could get treatment.

In the video, a female voice was heard asking the daughter of the victim a few questions about the attack.

When asked how it happened, she said, “She (my mother) was going to her site in Idofe after a road that leads to Oru along Quarry. She said she saw some cattle while she was driving on the road and as she made a quick attempt to reverse, she was surrounded by some Fulani men who emerged from the bush.

“She said they were about eight and the first thing they did was to shoot at all the four tyres and later went to block her car at the front. One of them carried a gun and wanted to shoot her. She begged him but he went ahead and shot her, removing one of her fingers.”

She explained that the attacker fired another shot which shattered her mother’s jaw and mouth, adding that the gunman shook her head to check if she had died.

“After she managed to alight from the car, she saw a tipper lorry and flagged it down. The driver rescued her and took her to Oru but she was rejected. We went to the general hospital she was also rejected. When we got to OSUTH , they also said there was no space.”

In the video, the interviewer explained her efforts to get the video across to some aides of the Governor Dapo Abiodun and other people she believed matter.

When contacted, the Police Public Relations Officer in the state, Abimbola Oyeyemi, confirmed the incident, adding that it happened on Monday, January 11.

He said three suspects had been arrested, adding that the Fulani herders who committed the crime had left their cattle on the spot and fled.

He said “Those people have a piece of land between Oru and Ago Iwoye. They went to inspect the land. One Alhaja who was going with them had excused herself with the promise that she would join them on the land.

“On getting to the land, they discovered that some Fulanis were attacking a labourer hired to clear the land in question. Those people immediately ran to those in the neighbourhood and in the process, the Fulanis left the victim and took to their heels.

“Unknown to the Alhaja, on her way to join the people, the Fulanis laid in ambush for her and opened fire on the vehicle she was driving. The woman was hit by a bullet and the Fulanis, who perpetrated the crime, ran away.

“When the police were informed, they went to the scene and could not find any of them but they saw the cattle they left behind. The police, in conjunction with the local vigilante group and hunters didn’t allow the cattle to leave the spot.

“Around 10pm, three Fulani men came to the spot with the aim of taking away the cattle and the police apprehended them. They have been transferred to the police headquarters in Eleweran. They have strong connection to the crime.”