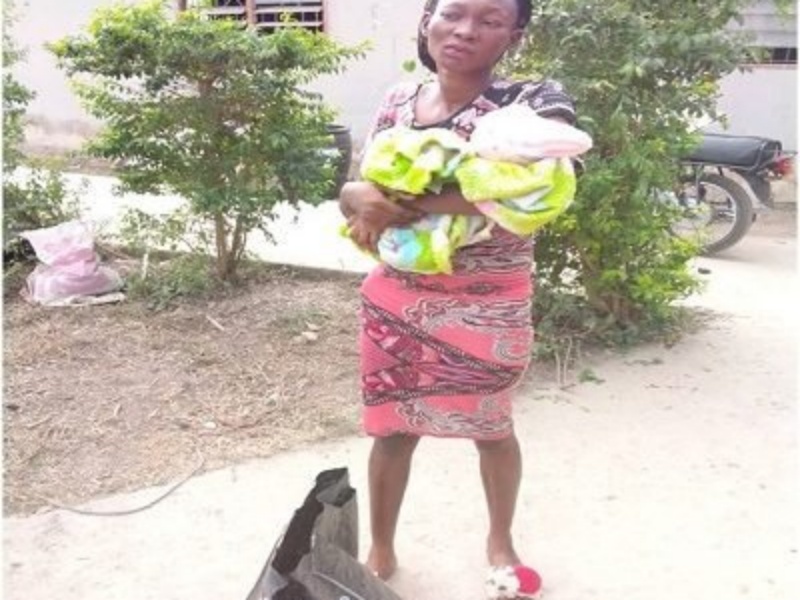 A man of God in Ondo state has explained to the police how he ended up buying a day-old baby for N10,000.

The Ondo- based Pastor identified as Olawale but popularly called Eri Aditu bought the day old-baby in the Ondo West Local Government area.

The mother of the baby, Seun Oladayo, had wanted the baby to die after delivering but her brother alerted Pastor Olawale, who paid for the baby and later officials of the Ondo State Security Network known as the Amotekun Corps.

The mother of the baby, Oladayo, who claimed to be 22 years, had cut the umbilical cord but for the timely intervention of Pastor Olawale the baby would have died.

Oladayo confessed that she sold the baby because there was no money to cater for it.

She said the father left her the day she informed him that she was pregnant.

It was gathered her family forced the baby out as it was not up to 36 weeks by giving the mother some drips and bursting the fluid in the womb.

Speaking to journalists, Oladayo said she cut the umbilical cord of the baby after delivery so that the baby could die but had to sell the baby when she realized that the baby did not die.

According to her: “I did it because I don’t know how I am going to take care of the baby. So I told the pastor to take the baby away and bring N10, 000.

“It is true I was dating a man called Tope. He asked me if I am pregnant so he could open a shop for me and I said yes. Since then, I did not see him again and I already have one child with me that I have been taking care of before I was pregnant again.

Pastor Olawale said: “The woman’s brother came to call me that I should come with him to their house as there is a newborn baby there and I went with him.

“I knew them when her first child was sick and I prayed for them. She was later pregnant after the prayer, but I did not see them again until Saturday when the brother called Yinka came to call me.

“When I got there, there was no proof that they are living in that house. It was cloth that was on the floor where the baby was born with blood. The house is located at Akinjagunla in Ondo.

“The brother said the woman was dating a man and they don’t want the man to know that she’s pregnant. And that was why they wanted the baby dead. It was the mother that cut the cord of the baby herself so that the baby would die.

“It was not time for her to give birth they gave her drips for four days so that she could give birth and also tap the fluid the baby is using since four days.

“I was told to bring N10,000 so that they can give the doctor N5, 000 for his job and I did because if I did not, another person would come and buy the baby

“The baby was given to me in a sack with the placenta and I went to Amotekun’s office to explain what happened and the woman was arrested and she was handed over to Police at Area Commander Yaba in Ondo.”