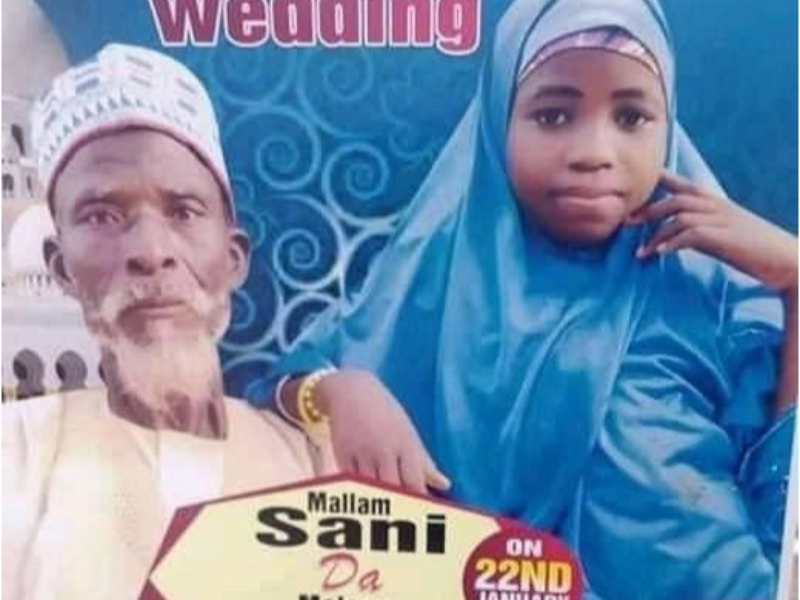 Reactions have trailed a photo that surfaced on the internet, showing an elderly man identified as Mallam Sani who wedded a little girl named Malama Jemila Sada somewhere in the Northern part of Nigeria.

The photo of the couple’s wedding calendar was shared on Twitter by Journalist Jackson Ude. According to the now viral photo, it appears that the couple held their marriage ceremony on Friday, January 22.

Sharing the photo Mr Ude questioned the act as he wrote,

What exactly is this on

Though the bride’s age is not known, she looks very young while her groom looks old.

Many Nigerians on Twitter condemned the marriage, stating that it is child abuse.

** Thunder strike Nigeria and divide us from people marrying their great great grand children, this is wickedness of the highest order, don’t you people have mercy at all? Imagine the pain she will be experiencing every night

*** This is craziness, are those Northerners who engage in this rubbish mad, why do they continue behave like bush Dog every time, why are they claims to be Goat. This is insanity.

*** Pedophiles hiding behind the mask of reiligion…. Looks like the negative side of the religion only affects the children of the poor.

*** Where are our Muslim Northern brothers and sisters in this street? Can’t they come and explain this to us? Why has all of them gone into hiding?

*** Ahmed Sani Yerima, the former governor of Zamfara state who introduced sharia law in Nigeria and was a member of Senate from 2007 to 2019 married a 13 year old girl from Egypt in 2011. So how would you classify him? Rich or poor? Elite or ordinary??

*** We have never heard or seen children & grandchildren of Governors, Emirs, elites of the North given out in marriage to grandfathers & great-grandfathers. It’s hypocracy to give out girl child in marriage. Northern Nigeria leaders are destroying the lives of their children.