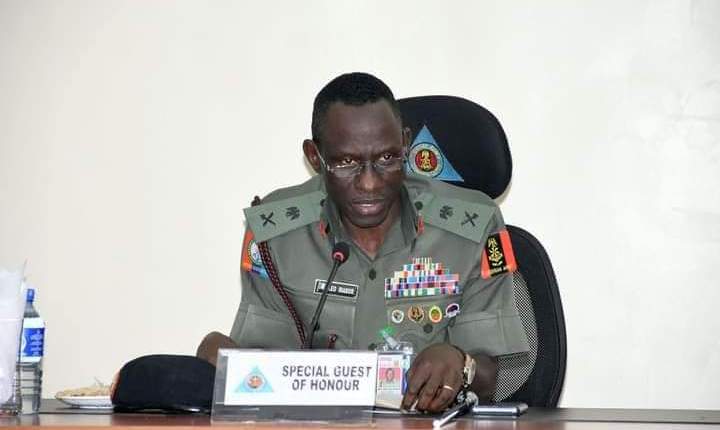 Major General L.E.O Irabor is a RC 34 officer who attained that rank in 2014 and has served as Theatre Commander in the NE. He hails from the vicinity of Agbor in Delta State.

He takes over from General Abayomi Gabriel Olonisakin

Major General Irabor who is the immediate Chief of Training and Operations, Defence headquarters, took over from the erstwhile Commander, Major General AA Tarfa.
On the 26th January 2021 he was appointed the new CDS by His Excellency, President Buhari.

Major General Lucky E.O. IRABOR is the Chief of Defence, Training and Operations at the Defence Headquarters, Armed Forces of Nigeria. He is an Alumnus of the Ghana Armed Forces Staff College Ghana, the National Defence College Bangladesh and Harvard Kennedy School of Government Executive Programme, USA. Major General Lucky Irabor is a trained Engineer from Obafemi Awolowo University and holds two Masters Degrees from the University of Ghana, Accra, and Bangladesh University of Professionals, Dhaka.

As the CDTOPs, he oversees training and operations in the Armed Forces of Nigeria under the direction of the Chief of Defence Staff. Specifically, he undertakes periodic reviews of a broad range of policies and activities relating to training and operations in the Armed forces. In addition to his schedules, he is the Chairman of the AFN Committee on COVID-19. The Committee is working to prevent the spread of coronavirus disease in the establishments of the Armed forces in line with Nigeria Centre for Disease Control protocols. The Committee is also giving support to the Presidential Task Force on COVID-19 including the deployment of Medical Personnel across the country to boost the available manpower in the management of the coronavirus pandemic in Nigeria.

READ  Kanu rallies support for Biafra in US, Canada

The General was formerly the Theatre Commander of OPERATION LAFIYA DOLE, North-East Nigeria as well as Force Commander Multinational Joint Task Force in the Lake Chad Basin Area. The operations focused on Counter-Terrorism/Counterinsurgency. He is a distinguished awardee of several militaries, ECOMOG and United Nations Awards and Medals. The senior officer is widely traveled.