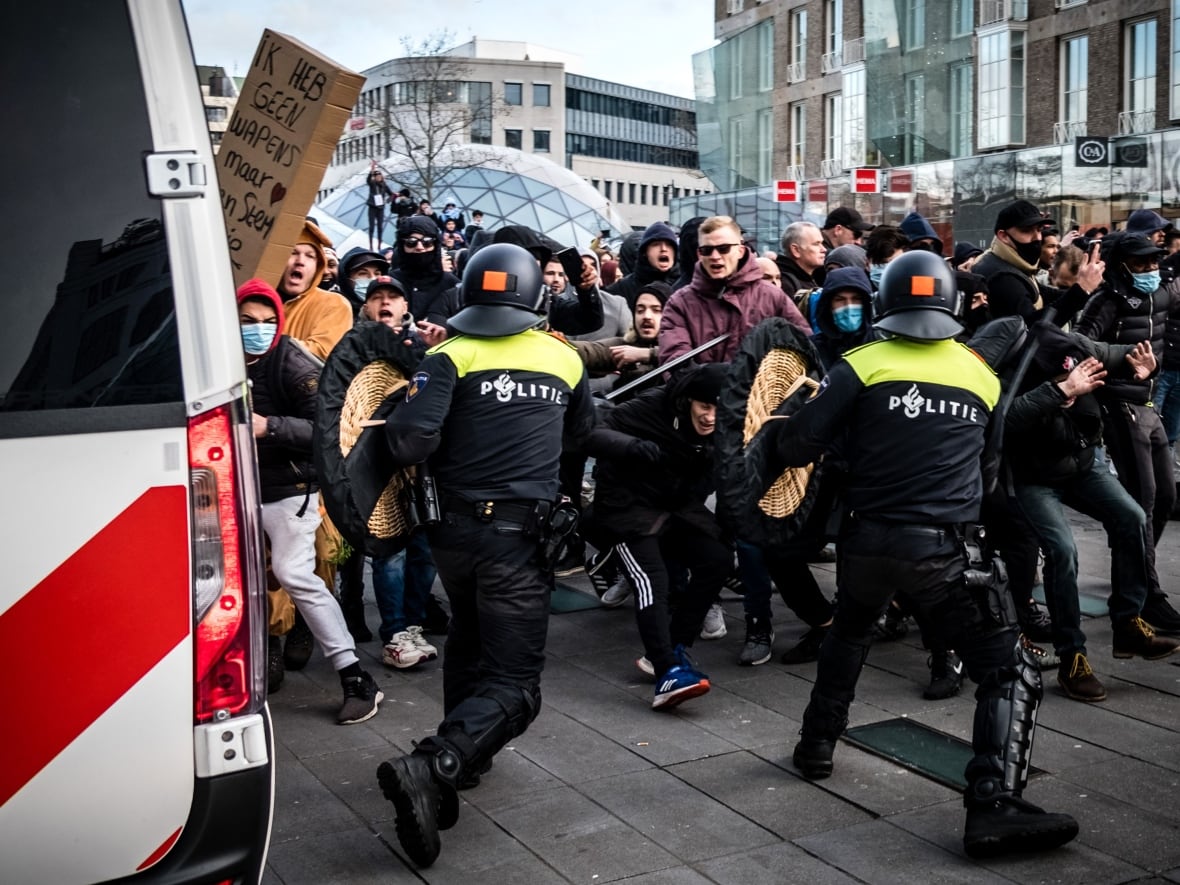 Police hailed operations on Tuesday night a “success” after taking to the streets of Dutch towns and cities in force to prevent violent rioting that shook the country for three successive nights after a nationwide curfew was introduced to curb the spread of the coronavirus.

Police in Rotterdam said they arrested 33 people for minor offenses before the nightly curfew took effect at 9 pm, taking to Twitter to confirm that “the deployment was quick, and with success”.

Local broadcaster Rijnmond reported that riot police were deployed in the south and west of the city, but police did not immediately report any major disturbances.

In Amsterdam, riot police were dispatched to a commercial street where a large group of youths had gathered and set off fireworks, but there were no violent confrontations.

The rioting, which started with the torching of a coronavirus testing center in a fishing village on Saturday night, is the worst to hit the Netherlands in years. It was initially triggered by anger over a tough coronavirus lockdown that has been in force since mid-December, but calls for rioting swirling on social media and mainly spread among young people increasingly fueled the unrest.

Schools have been closed in the country since the Christmas holidays. Police said Tuesday afternoon that video images showed that many rioters were young teenagers and that many of the people they arrested were picked up close to their homes.

“I join others in appealing to parents to keep their children at home. Certainly, after 2100, stay indoors,” said North-Holland regional Police Chief Anja Schouten.

READ  Why Biafra Will Be Achieved Soon – IPOB

The violence has stretched the police and led at times to the deployment of military police. On Monday night, rioters pelted police with rocks, fireworks and Molotov cocktails and looted shops in at least two cities, Rotterdam and Den Bosch.

A total of 184 people were arrested in Monday night’s unrest. Police ticketed more than 1,700 for breaching the 9 p.m. to 4:30 a.m. curfew, which carries a fine of 95 euros ($115). Officers around the country also detained dozens suspected of inciting rioting through social media.

Justice Minister Ferd Grapperhaus said earlier Tuesday that riots would quickly be brought before the courts and face possible prison terms if convicted.

“They won’t get away with it,” he told reporters in The Hague.

“If you rob people who are struggling, with the help of the government, to keep their head above water, it’s totally scandalous,” Grapperhaus told reporters. He stressed that the curfew is necessary for the fight against the coronavirus.

Populist right-wing opposition lawmaker Geert Wilders called for the army to be used to quell rioting, something the government has so far ruled out.

Rotterdam Mayor Ahmed Aboutaleb posted a video message on Twitter, asking rioters: “Does it feel good to wake up with a bag full of stolen stuff next to you?”

He also appealed to parents of the young rioters, asking: “Did you miss your son yesterday? Did you ask yourself where he was?”

The municipality in Den Bosch designated large parts of the city as risk areas for Tuesday night, fearing a repeat of the violence. Residents took to the streets Tuesday to help with the cleanup, and the city’s mayor said he would investigate authorities’ response to the rioting.

“The riots have nothing to do with protesting or struggling for freedom,” he added. “We must win the battle against the virus together because that’s the only way of getting back our freedom”.

The rate of new infections in the Netherlands has been decreasing in recent weeks, but the country’s public health institute warned Tuesday that the new variant of the virus first detected in Britain is gaining ground and was responsible for more than one-third of infections over the last week.

The country has registered more than 13,650 confirmed COVID-19 deaths.