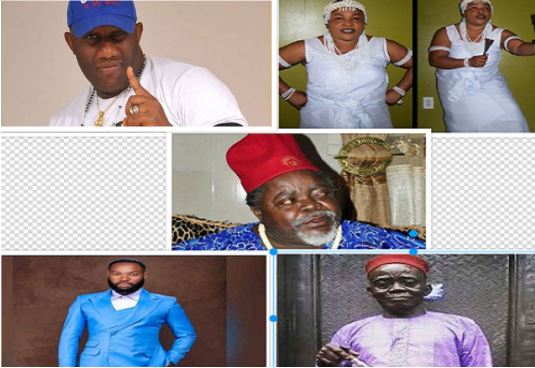 Find out all about the Nigerian actors and actresses who sadly passed away in January, 2021.

Nollywood has recorded at least five deaths in the last 30 days.

Nollywood actors who died in January 2021 include: Her death, which threw the theatre industry into sadness, was confirmed by a family source.

The veteran actress, who hailed from Olla in Kwara State, died at 60 in her residence in Ibadan, Oyo State.

Her death came four months after the demise of her ex-husband, Jimoh Aliu popularly called Aworo under whose tutelage she rose to prominence in the film industry. The Imo-born thespian gave up the ghost after complaining of severe body pains.

He joined the film industry in 2004 where he starred in several films. David Mela was a fast-rising Nollywood actor. He died from an undisclosed ailment on January 11, 2021.

The young actor was said to be passing through a hard time in his life as revealed by a post before his untimely death. His son, Dan Nkoloagu Jnr, announced his death on his Facebook page.

He wrote: “IT WAS A BLACK FRIDAY FOR US YESTERDAY as my Dad left us without saying goodbye.”

Nkoloagu, who died at 83, was popular for playing the role of a native doctor in many Igbo movies.

READ  Rape Is Evil, If You Did It In The Past It Will Hunt Your Future – Lagbaja Reacts To Rape Saga In Nigeria His wife, Jennifer Asuzu, who confirmed the sad incident to The Nation, said he fainted on Tuesday evening and never woke up.