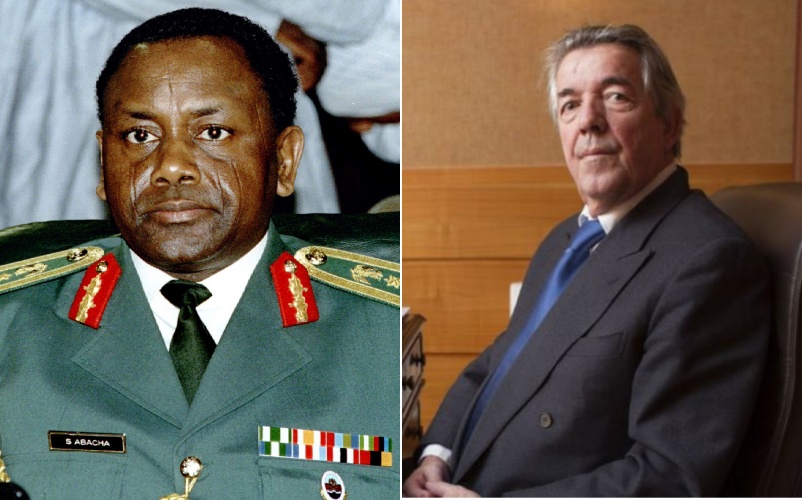 Over 20 years after his death, late Nigeria Military dictator, General Sani Abacha’s many loots is still talked about, as the late ruler did a humongous number on the Nigeria economy before his mysterious death in June 6, 1998.

Enrico Monfrini, a Swiss lawyer has revealed how he helped the Nigerian government recover billions of dollars stolen by the late Sani Abacha.

After looting Nigeria’s reserves, Abacha who ruled from 1993 until his death in 1998, died before spending his loot, prompting an international treasure hunt that has lasted for decades.

Enrico Monfrini, said he received a phone call in September 1999 from former Nigeria president Olusegun Obasanjo asking if he could help recover the stolen funds.

Monfrini says a high ranking government official was then sent to Geneva by Obasanjo, to recruit him to get hold of the money looted by Abacha.

“He called me in the middle of the night, he asked me if I could come to his hotel, he had something of importance.” Monfrini told BBC’s Clare Spencer.

“He asked me: ‘Can you find the money and can you block the money? Can you arrange that this money be returned to Nigeria?’

“I said: ‘Yes.’ But in fact I didn’t know much about the work at that time. And I had to learn very quickly, so I did.”

Monfrini says the Nigerian police then handed him the details of a few closed Swiss bank accounts, which appeared to be holding some of the money Abacha and his associates had diverted.

He said police investigations in November 1998 found that more than $1.5bn (£1.1bn) was moved by Abacha and his associates.

He said Abacha used sleek methods in diverting the funds.

He said one way was that Abacha would tell an adviser to make a request to him for money for a vague security issue, he will then sign off the request which the adviser would then take to the central bank, which would hand out the money in cash, that will then be taken to Abacha’s house.

READ  Photos: President Buhari arrives in the Hague ahead of his 3-day official visit to attend ICC's 20th anniversary

Some money was even taken in dollar notes “by the truckload”, Mr Monfrini wrote.

Monfrini said another method included awarding state contracts to friends at inflated prices and then keeping the difference and demanding foreign companies pay huge amounts before being allowed to operate in the country.

“The documents showing the history of the accounts gave me a few links to other accounts,” said Mr Monfrini.

Monfrey said he took some of his documents and information to the Swiss attorney general.

Monfrini says he put it to Swiss authorities that the Abacha family and their associates formed a criminal organisation which allowed the Swiss government to take a different view towards the different bank accounts where money was stored.

The attorney general issued a general alert to all the banks in Switzerland demanding that they disclose the existence of any accounts opened under the Abachas’ names and aliases.

“In 48 hours, 95% of the banks and other financial institutions declared what they had which seemed to belong to the family.”

This led to other Banks all over the world releasing information about Abacha’s stored funds according to Monfrini.

“Banks would deliver documents to the prosecutor in Geneva and I would do the job of the prosecutor because he didn’t have time to do it,” Monfrini told the BBC.

“Showing the ins and outs on these bank accounts gave me further information regarding other payments received from other countries and sent to other countries.

“So it was like a snowball. It started with a few accounts, and then a large amount of accounts, which in turn created a snowball effect indicating a huge international operation.

“Bank accounts and the documents that go with them talk a lot.

“We had so much proof of different money being sent here and there, Bahamas, Nassau, Cayman Islands – you name it.”

“Nobody seems to understand how much work it entails. I have to pay so many people, so many accountants, so many other lawyers in different countries.”

According to Monfrini, he said he agreed with the Nigerian government to get a commission of 4% on the money sent back to Nigeria and according to him his percentage was “very cheap”.

He added that locating the money was one thing but sending it back to Nigeria became very hard because the Abacha family were fighting tooth and nail.

“The Abachas were fighting like dogs. They were appealing about everything we did. This delayed the process for a very long time.”

Swiss politicians then started deliberating if it was necessary to send the money back as it would be stolen again.

Monfrini wrote in 2008 that $508m found in the Abacha family’s many Swiss bank accounts was sent from Switzerland to Nigeria between 2005 and 2007.

By 2018, the amount Switzerland had returned to Nigeria had reached more than $1bn.

He then revealed that some countries were slow and frustrated him when it came to returning the stolen funds.

“Liechtenstein, for instance, was a catastrophe. It was a nightmare.”

Six years later, in May 2020, $308m held in accounts based in the Channel Island of Jersey was also returned to Nigeria.

Monfrini says he is still expecting $30m he says is sitting in the UK to be returned, along with $144m in France and a further $18m in Jersey.

That should be it, “but you never know”, he says.

In total, he says his work secured the retyrn of just more than $2.4bn.

“At the beginning people said Abacha stole at least $4-$5bn. I don’t believe it was the case. I believe we more or less took the most, took a very large chunk, of what they had.”

Monfrini says he is happy now that the Abacha family are no longer as wealthy as they used to be and he is satisfied with his work.

“They are not swimming in money like they used to do in the past.”

“When I speak to my very many children about this case, I tell them I found money and I blocked the money, I persuaded the authorities to go after these people and get the money back to the country for the good of the Nigerian people.

Since Abacha’s death, Nigeria has received $3.61 billion of the money looted by his military government with the latest being the $311m returned by the U.S. and the British dependency of Jersey. According to the anti-corruption agency Transparency International, the military ruler stole as much as $5 billion during his time in office, with Switzerland believed to have returned around $1bn over the last decade.