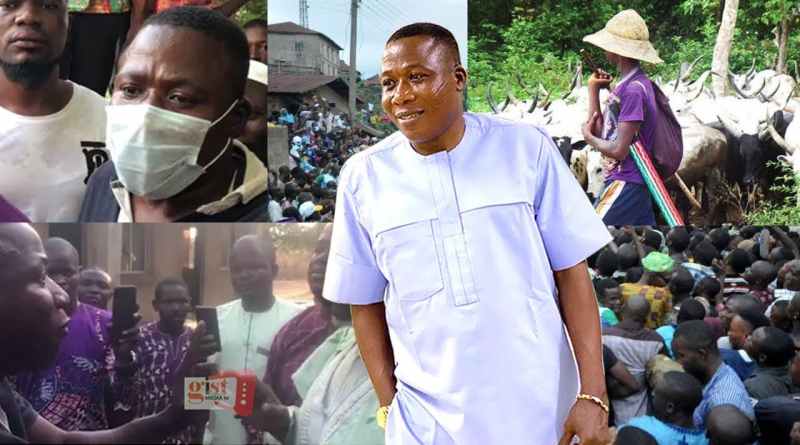 A body, Lanlate Renaissance Group, has declared its support for Yoruba activist, Sunday Adeyemo, also known as Sunday Igboho, in his bid to check the insecurity in Ibarapaland.

The group, in a statement by its Secretary, Abimbola Adeyeri, said unfortunately those who have been making comments on the invasion of the Fulani settlement in Igangan, Oyo State by Igboho and his supporters, have failed to put the series of events that led to it into proper perspective.

Adeyeri said in the statement: “Our attention has been drawn to the media publications on what transpired in Ibarapa land in the last one week leaving out the comprehensive details of how we got to Friday, January 21, 2021, when the whole of Ibarapa land suddenly went agog with renewed strength of reclaiming their land. The long-awaited ray of hope for liberation glimmered in the form of Chief Sunday Adeyemo Igboho who led the Ibarapa people like the Biblical Moses through the Red sea. First, it was the Governor of Oyo state that spite one of the five geopolitical zones in Oyo state; Ibarapa in a state broadcast by referring to our plights as a mere exaggeration. The statement of the Governor was not only absurd but a disrespect to a people who has no record of violence in the history of our nationhood. Some media reports on the directive of the Governor and the Inspector General of Police to arrest Chief Sunday Adeyemo then rubbed salt on our injury as a people.

“Ibarapa is a geopolitical zone in Oyo state made up of seven sister towns. The zone is made up of three Local Governments and seven towns namely: Lanlate, Eruwa, Igboora, Idere, Ayete, Tapa and Igangan. These communities are agrarian communities known for their hard work, diligence and brilliance. These sister towns are the food basket of Oyo state. They produce crops like cassava, maize, yam, vegetables, etc. They feed the entire nation with lafun a fermented dried product from cassava. So, Ibarapa is synonymous to cassava, ilasa (a local vegetable) and lafun.

“Ibarapa is the home to three state owned tertiary institutions (one Polytechnic, one College of Agriculture & Technology and a College of Education). Lanlate in Ibarapa was the home to the Nigeria’s first Satellite Earth Station of Nigerian Telecommunication Limited, (Nigeria’s first link to the outside world); Obasanjo Farms Nigeria Limited; Sotinoye Aderupoko farms; UAC Foods Meat Plant (Later Zartech Farms) and many agro-processing factories. Ibarapa is the home of the First Nigerian Anglican Bishop, Bishop Ajayi Crowther, who hailed from Osoogun in Lanlate; just to mention a few.

“Ibarapa people are predominantly farmers, feeding Oyo, Ogun and Lagos states with hundreds of tonnes of food crops on daily basis. Ibarapa people are not pastoral farmers they deal only with food crops and have mastered their trades for hundreds of years without any ethnic or communal clashes over the years. Just like every Yoruba people they gladly accept and accommodate visitors and strangers. A virtue that today has turned to be our greatest undoing. Having the pastoralists; the Fulanis have not been without pains, sorrows and tears over the years. The people are helpless, restless and despondent over the activities of some unscrupulous herdsmen and criminal gangs that have been kidnapping, killing and extorting money from helpless citizens through ransom payments. They invade our farms, rape our young ladies and women, destroy our properties and recently became bandits and terrorists in our midst.

READ  Nigeria Ranks No. 1 In Open Defecation In The World – Minister

“For many years, farm plundering was the full-time business of the Fulani herders, growing audaciously in bounds even as their highest authorities and agents of government ensured no Fulani was prosecuted for offences they were caught committing. When they are caught in the dastard acts. They will result to violent attacks with machetes and guns. It is obvious the security agencies and governments at all levels have failed and left the masses to their fates. The obvious things to do when everything has collapsed is for people to resort to self-help.

“For the purpose of records, we shall elucidate on some of the prominent killings in our domain that have gone unabated with astronomical spike in the last 24 months resulting in about ten deaths and over twenty-five abductions. Telling our tales to the world to hear and believe in the absence of trusted media was painfully not possible, as every carnage described would be greeted by fulani’s obnoxious denial in total relegation to an abyss of falsehood. Every arrest would be truncated by their Seriki, and the bulk of the world felt the gory episodes ravaging Ibarapa land were just series of exaggerated tragedies meant only to discredit the perpetrators.

“Each of the towns in Ibarapa has had fair share of these dastard acts of these blood thirsty herders. In September, 2019, four staff of Oyo state College of Agriculture and Technology, Igboora were kidnapped and were later released after payment of ransom. The victims confirmed they were kidnapped by Fulani herders. No government agency has made any arrest or provide any details of this dastard act till date. The Governor did not read the riot act.

“Barely a year ago, popular Lagos based traditional medicine practitioner Alhaji Fatai Yusuf, a k a, Oko Oloyun was shot dead along Igboora-Eruwa axis of Ibarapa. Till today, the government and her agencies have not apprehended or prosecute anyone for this dastard act.

“Also, on the 10th of July, 2020, Ms Modupe Oyetoso and her fiancé were returning from their farm in Igbodudu, Lanlate around 5pm when blood thirsty herders accosted these young agropreneurs killing Modupe’s fiancé and whisked Modupe away for two days. She spent two days with her abductors and only secured her release after an undisclosed sum of money was paid as ransom to the kidnappers. This story was taken to the Governor in person. He made promises which till date has not been fulfilled. Modupe confirmed her abductors were fulanis. Engr. Seyi Makinde did not read the riot act. Our group took this up to the Speaker of Oyo State House of Assembly in person as this happened in his constituency. Mr Adebo Ogundoyin will possibly act tomorrow. Mr Speaker and the Governor can deny this and we will show them video evidences and text messages. Hon Yemi Taiwo, representing Ido/Ibarapa East Federal Constituency in the House Of Representatives whose ward is where the kidnapping of Ms Module Oyetoso and killing of her fiancé took place was equally contacted, till today, he never said a word or shown any sign of concern not to talk of raising the matter of insecurity of lives and properties at the plenary for once. Today, Ms Modupe Oyetoso has abandoned her over 5000 hectares of farms due to the trauma she passed through.

READ  I Did Not Order Soldiers To Kill Oyigbo People, Wike Declares

“Barely two weeks after Modupe’s case, a Cocoa farmer and merchant, Alhaji Fatai Ogunniyi also known as ‘Fatai Cocoa’ was kidnapped on the Maya axis of Lanlate. He was later released two days after a huge ransom was paid. He confirmed he was kidnapped my Fulani herders; Mr Governor did not read a riot act. On the 12th of December, 2020, Dr Fatai Aborode, a prominent son of Igangan and a University of Glasgow, Aberdeen trained Chemist was murdered in cold blood on his farm by Fulani herdsmen. He has established hundreds of hectares of farmlands employing youths from his hometown Igangan and other sister communities of Ibarapa and beyond. No government statement or positive action to track his killers.

“It must be put on record that, since the hacking to death of Dr Aborode in Igangan in December, 2020 no day has passed without the herders attacking, kidnapping or even killing innocent Ibarapa indigenes. On the 2nd of January, 2021, Mrs Sherifat Adisa, the owner of Subawah Petroleum and two other persons were shot dead by Fulanis in Idere, another town in Ibarapa. This led to the demonstration and closure of petroleum filling stations for five days in the entire Ibarapa land. What did the Governor and our representatives do?

“Going by the aforementioned of dastard acts just a few, it is evident that the ‘touch not my anointed and do my herders no harm’ message of our state Governor and the federal Government is loud enough. Men may perish. Maidens may be ravished. Scores may be abducted. Ransoms may be extorted. And lives may be lost. But insofar as my herders roam the lands in safety, whether in the forests or in grasslands, all is well. It is absolute absurdity that Oyo State’s Governor could mistake Ibarapa the epicenter of the Fulani killings for Oke Ogun in the first place. It will be preposterous that further agony will be meted out to us or our benefactor.

“Presidency and IGP are deaf and dead to kidnapping, rape and other criminalities being perpetuated by the Fulanis, but are quick to give arrest order for a man who rose to defend his people. No one likes chaos, but a breaking point exist for everything in life. The question is if the Yorubas will allow Sunday Igboho to be arrested. I wonder which of the government’s role was fulfilled, power, healthcare, water, education, road, security, etc.

“Issuing tough orders will exacerbate an already charged situation. Gov. Makinde should use tact and “native intelligence” to handle this tensed situation. This is his state and he should not allow some “miscreants and mischievous elements” both in the state and Abuja in goading him to commit a grievous mistake. He should not allow extremists and the President to declare a state of emergency under the guise of ensuring safety in his state.

“Let it be known to both local and international communities that, government failed in their primary role in Oyo State and another at the Centre is in comatose. Blame these irresponsible Governments and not Igboho who only filled a vacuum. Nature detests vacuum. Only in Nigeria would Fulani herdsmen RAPE, MAIM and KILL mercilessly in their raid of farms and towns, and the IGP wouldn’t order the arrest of any.

“Yet, the few bold men who stood up to defend their communities are labelled CRIMINALS by their own Governor and the IGP declaring their arrest. The people had been crying for freedom for a long time with no one to help. Ibarapa land trooped out on Friday to welcome Sunday Igboho to execute the eviction order he gave to the Seriki Fulani of Oyo State seven days earlier only because the apparatus of government has failed woefully. The governments should bury their heads in shame and not fan any ethnic crises as a result of this defense of our territorial integrity.

“As a way forward, the IGP directive is unnecessary and will only escalate the fragile peace that is currently being managed. The state government should be alive to their responsibilities and stop heating up the polity. The IGP and Oyo state government should work on having a biometric data base for the herders who may still want to work in our domain. Work speedily on creating a national grazing policy. In the interim, the status quo still remains. The need for Agro rangers to help the farmers will be good at this time. The facilities of the NITEL in Lanlate is still available and idle to be used by Military and Police base to serve the entire Ibarapa land. Compensations should be paid to all the victims of the killer herders. International communities, media outlets are welcome to hear directly from the survivors of these heinous crimes. We are committed to peace and tranquility in our land. God bless you all.”