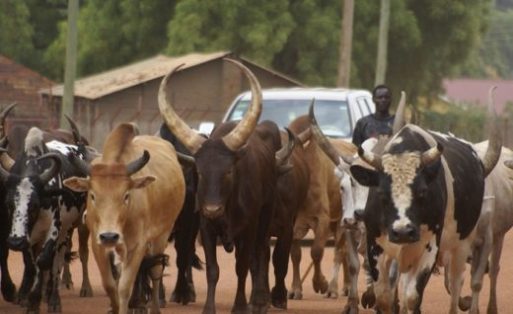 Herdsmen have returned in Oyo state with a ‘no cross’ sign at some farms to warn residents of the area.

Herdsmen have warned residents of Ibarapa and Oke Ogun zone of Oyo with a ‘no cross’ sign, asking them to stay away from certain areas in the state.

This is despite Governor Seyi Makinde’s vow to tackle the security challenges in the Ibarapa and Oke Ogun zone of the state.

The incident has forced some farmers home to avoid confrontation.

The governor last week said that, among other measures, additional 200 operatives of the Oyo State Security Network codenamed Amotekun Corps would be deployed to the region for forestall attack on residents. But on Friday, some farmers were attacked on their way to the farms by suspected herders in Igangan. Some farmers, who resided on farm settlements, were also sent out of their farmlands.

The Convener Igangan Development Advocates, Oladokun Oladiran, said many of the farm settlers have been sent packing. Oladiran appealed to the government to quickly ensure that the Amotekun deployed by the government put a stop to the forced eviction.

He said the herdsmen mounted a no-cross zone on farmlands, a signal to warn farm owners and farmers not to step on the farmlands or risk being killed.

Oladiran said: “There have been reprisals. I am telling you now that we are beginning to witness reprisals in Ibarapa. We want to urge the government to quickly instruct Amotekun Corps to the region.

“We are aware that they have been deployed ahead but they have not mounted a resistance against the attacking Fulanis who are very armed. They have not approached them either for peaceful talks or to resist them in any way.

“Today (Saturday) at Kajola axis of the farm settlement that belongs to people of Idere, Ayety, Tapa side, the Gaa Wakili Fulani dwellers, with heavy weapons were firing at farmers who tried to go their farms.

“They have mounted a no-cross zone. Every farm, every settler, has been sacked and sent packing. People who are staying on those farmlands are back in the town helpless. No food, but helpless.

“A boy and his brother escaped with gunshot wound because they were able to turn back quickly with their motorcycle when they observed the red flag mounted to indicate a no-cross zone by the herders.

“One of them was hit by the herders’ bullet. I, Oladokun Oladiran, went there to see the boy and his family spoke with them to confirm the report.

“I met my people at Gbangbagere village, who use to pound yam for us on the farm when we go to the farm, they have been sacked from their farm settlement and they are all back in town.

“Their settled area is not in town. Those farm settlements are like home and houses for them. Sometimes, they don’t come to town for a month, working on the farm and residing there but now, they are all back in town.

“I wonder how they will eat and feed their families because they could not pack anything from the farms but had to rush to leave everything when they started hearing gunshots on the farm.

“They have all moved their belongings, the Fulanis have chased them. We cry to the government, the Amotekun deployed, let them be ordered to quickly put this fire to a stop.”

Recounting how they escaped from the killed, one of the young farmers, who did not want his name mentioned, said: “We were going to the farm in the afternoon. We observed a red flag by the roadside and when we got there, my brother who is riding the motorcycle advised that we turn back but I said we should continue the journey to the farm.

“After passing by the red flag, we also observed heavy log by the road used as roadblocks and he the rider said we should turn the bike and head back home.

“But I had to alight from the bike so that he would be able to manoeuvre the bike and turn easily. So, the moment I stepped down from the bike, we just started hearing gunshots aimed at us from a distance. If we had moved another few miles before turning we would have fallen into their hands.

“We observed that those shooting and running after us were Bororo herders and were targeting us, to kill us. While trying to escape, I sustain gunshot at the back and sustained another injury in my head.”

In his account, the rider of the motorcycle, who also pleaded anonymity, said: “We just saw them coming out from both sides of the road of the Fulani settlement in Gaa Wakili.

“Despite shooting at us, they still gave us a hot chase with the determination to catch us but they could not.

“So, after I had gained some distances, I had to wait for my brother and that was how I was able to carry him and we escaped from being killed but, bullets had already hit him somewhere on his back.”

The father of the affected boys said: “As we speak, all of us here are from the villages in the Kajola axis. They were the ones that chased us all out of our farms and no one can go there again. We have stopped going to the farms for a while now.

“Our cashew, our cocoa, we dare not go there to harvest. Our village is precisely from Gbagbandere and we are now strangers on our land.

“They chased us from our farms and no one is on the farmlands again. They have taken possession of the farms and they have vowed that the person who will chase them away from that place must be ready for war.

“The leader of the herders in that axis is one Iskilu Waikiki who has been tormenting people in the area for a while. He is their father and had that place named after him.

“But, the name of the leader of those attacking farmers in the latest crisis is named one Abu. There has been no relationship between the Yorubas and Fulanis in that axis but they have been suspected kidnappers.

“Some people were arrested last year with arms, it was the Abu that led them but they were later released by the police. So, everyone had been avoiding any rapport or relationship with them in that axis until they grew in numbers and started sending people away.”

He said the intervention of Olori-ode (head hunter) who helped to extract the bullet before my son saved his life before it could cause more damage.

Also speaking on the situation, a resident of Ayete said the crisis began some days ago when a Fulani herdsman, Iskilu Wakili, was asked to leave the village because he did not buy the land he was occupying.

The demand was said to have infuriated the herder, who claimed he was a combatant with arms and ammunition.

The Asawo of Ayete, Oba Emmanuel Okeniyi, said those who have farms in the villages had fled the places over fear they might be attacked by Wakili.

The monarch said: “They asked him to leave the area. I don’t think he bought the land from anybody and the owners of the land asked him to leave. But rather than leaving, he has become a terror. The Fulani there usually destroy their farms.

“The farmers in the villages have fled their places; they are just loafing about now. Government has deployed Amotekun personnel in Ayete. They came yesterday (Friday) but I haven’t heard that they have gone to those villages.”

Another resident, who pleaded anonymity, said Wakil and his followers barricaded the road leading to the villages, adding that they threatened to shoot dead any villager who moved close to the place.

He said: “This started three days ago. The villagers had fled the place. The Amotekun personnel deployed by Oyo State Government are in Ayete, they have not gone to those villages. The police are not going there despite the several distress calls made to them.

“One of the sons of Seriki Fulani who fled Igangan told me that Yoruba people should bring Sunday Igboho to face Wakili. He said he would finish him and his followers.”