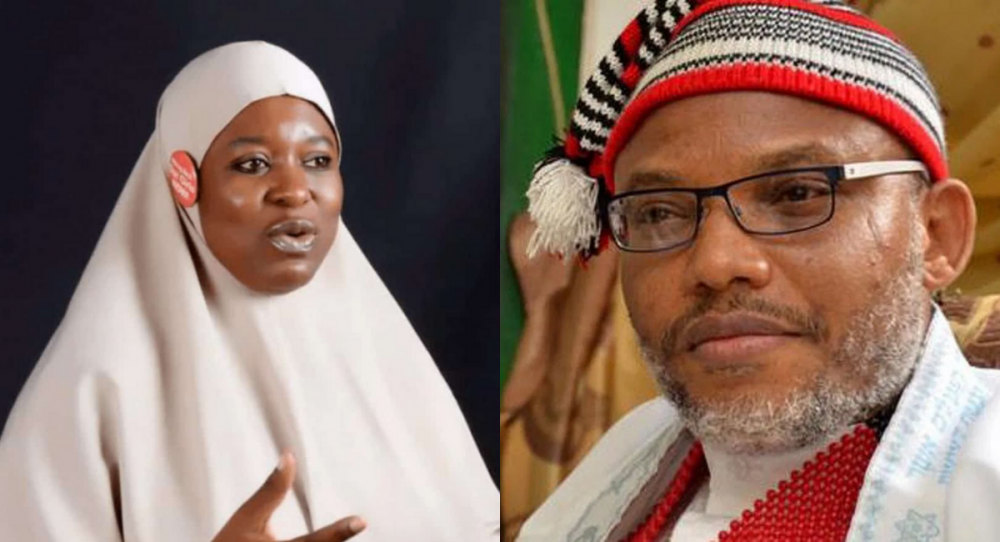 Nnamdi Kanu had earlier described Aisha Yesufu as a ‘talkative lunatic’ following her reactions and comments in condemning ESN for attacking herdsmen in Abia.

Recall that on Sunday, Jan 31, Nnamdi Kanu had shared a video on his Facebook page showing how the Eastern Security Network, ESN, operatives invaded the camp of some herdsmen in Isiukwuato, Abia State, to chase them and kill their cows.

Yesufu while reacting to Nnamdi Kanu‘s video condemned the incident.

Aisha added that no one has the monopoly of violence.

She tweeted: “This is absolutely not acceptable. We cannot have security outfits taking laws into their own hands & maiming, killing & destroying properties. This is not acceptable. We must always remember no one has a monopoly of violence and intolerance and we can all be mad. Let the law guide us!”

In a statement issued by the IPOB media and publicity secretary, Emma Powerful on Monday, February 1, Kanu said “If you are one of the #Zoo animals suffering from an advanced form of Stockholm Syndrome, may it kill you there. We in the East are not, have never been and can never be slaves to any bunch of retards. Ask the British.

“We won’t tolerate any iota of killer Fulani herdsmen menace in the East. You may be comfortable with your wretched Fulanised existence where you are but we won’t live with that rubbish in the land of the Rising Sun.

READ  If heaven is where Adeboye, Kumuyi and others will go, then I don’t want to go there – Facebook User

“Where were you when our people were being slaughtered, raped and kidnapped in Isiukwuato? Talkative lunatics like Aisha Yusuf.”

Aisha hit back on Twitter, writing: “I haven’t seen the reply ooooh!

Anyway let him take his low grade mentality to his followers who decided to replace their brains with bread and looking for feet to kiss rather than planting themselves in the seats of power and controlling the narrative! #VictimMentality.”

After seeing Kanu’s reply, she wrote: “Tell the Made in China Shekau that I am not one of those #VictimMentality people that are swayed by his premature beard and stooped posture that he has taken on that have them kissing his feet with his infantile outbursts and decision making that have had him out in the cold.”

In other posts, Aisha continued to condemn the actions of ESN and those supporting them. She pointed out that violence must be condemned, not supported because it’s being carried out by Kanu’s tribesmen.

To those supporting ESN’s actions, she tagged them people with #VictimMentality. Read more of her tweets below: