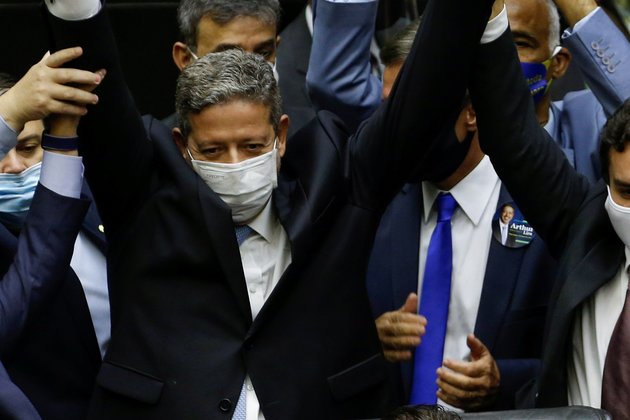 Allies of the president elected as the head the Senate and lower house, a key victory ahead of the next year’s presidential election.

Brazil’s Congress has elected two allies of President Jair Bolsonaro to head the Senate and lower house, an important victory for the far-right leader as he seeks to re-galvanise his reelection efforts for 2022.

Arthur Lira of the Progressives (PP) won in the first round of votes for speaker of the Chamber of Deputies by 302 votes out of 513. Earlier, the Democrats’ (DEM) Rodrigo Pacheco was elected Senate speaker with 57 out of 81 votes.

Bolsonaro hailed the results on Twitter, posting photos of himself with the new congressional leaders.

He had gotten personally involved in the leadership battles in both houses of the legislature, looking to improve his troubled relations with Congress and stave off the 61 impeachment requests he is facing.

The speakers of the Senate and Chamber of Deputies, who are elected for two-year terms by their colleagues, are key gate-keepers in Brazilian politics, with the power to decide which legislation comes up for a vote.

The lower-house speaker also has the power to accept or shelve motions to impeach the president – no small matter for the leader dubbed the “Tropical Trump”, who has racked up dozens of such motions halfway into his four-year term.

Lira promised “neutrality” in leading the House and asked for a minute of silence to honour the victims of COVID-19.

Bolsonaro, who currently has no political party, has struggled to get legislation passed in Congress and is increasingly unpopular amid a raging second wave of COVID-19 in Brazil.

He won the election in 2018 with support from the business sector, vowing to push through a long-delayed programme of privatisations and austerity reforms.

But he has made virtually no progress on that agenda. Instead, the economy has taken a beating from the pandemic, which Bolsonaro has insistently downplayed.

Seeking to use the leadership votes to bolster his clout with Congress, Bolsonaro struck an alliance with a coalition known as the “Centrao,” or “big centre”, a loose group of parties whose priority has traditionally been gaining access to government posts.

Maia has a strained relationship with Bolsonaro, and reacted furiously when other lawmakers from his party defied him to back Lira.

He reportedly threatened to use his last day in the speaker’s seat to open impeachment proceedings against Bolsonaro, before backtracking

The voting could have stretched into the early hours of Tuesday if none of the candidates had obtained at least 257 votes of the total of 513.

Bolsonaro’s standing in Congress should dispel for now the growing clamour for his impeachment from critics who have filed 60 requests to unseat him, mainly for his handling of the coronavirus pandemic that has killed some 224,000 Brazilians.

Pacheco, of the centre-right Democrats party, has vowed to seek a compromise between fiscal restraints and assistance to socially vulnerable Brazilians hurt by the pandemic.

He has also said he would not make a priority of privatising Eletrobras, Latin America’s largest utility and one of the government’s biggest potential asset sales as it works to cut the fiscal deficit.

Despite a deep recession and the world’s second-deadliest COVID-19 outbreak, opinion polls show Bolsonaro retaining his core support of a third of the electorate, though his support dwindled in January as the second wave of the pandemic began to bite.

His popular support, along with a growing willingness to discuss traditional horse-trading in Congress, has helped him secure a political base of centre-right lawmakers.