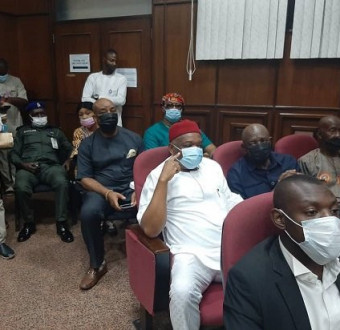 Senate Chief Whip, Senator Orji Uzor Kalu has arrived the Federal High Court in Abuja ahead of his arraignment.

The ex-governor is set to be docked before Justice Inyang Ekwo on money laundering related charges.

It will be recalled that Senator Kalu, who was the governor of Abia State from 1999 to 2007, was earlier found guilty and handed a 12-year jail term by the Lagos Division of the court.

The trial court convicted him alongside his firm, Slok Nigeria Limited, and a former Director of Finance in Abia State, Jones Udeogu, for allegedly stealing about N7.1billion from the state treasury.