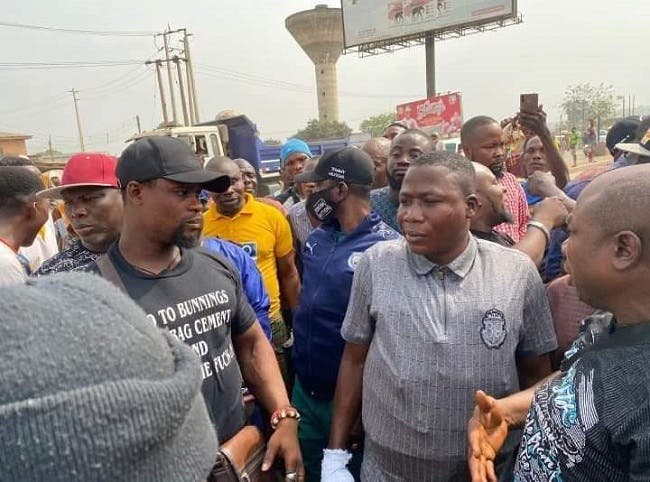 Hoodlums have attacked the residence of Fulani leader in Ogun state following the visit of Sunday Igboho.

Angry residents of a community in Ogun state have razed the home of Fulani leader in Eggua, Ogun community in Yewa North Local Government on Monday.

The hoodlums attacked the house shortly after the visit of Sunday Adeyemo, popularly known as Sunday Igboho, according to a report by Nigerian Tribune.

Recall that Igboho was in some Ogun communities in Yewa area of the state over alleged attacks on Yorubas by herders.

It was also gathered that Kara market in the town was also set on fire while cows were killed by the hoodlums.

Information had it that one Alhaji Jiji was burnt to ashes by hoodlums.

The incident was confirmed to newsmen by one of the children of Seriki Fulani, who identified himself as Suleiman Adamu.

He explained that his father’s house and Kara market were set ablaze by people suspected to be loyalists of Igboho.

Adamu said his father had been hospitalised due to the attack.

He said, “Right now there is tension everywhere. We watched as they set the house on fire. But we managed to get our father to escape during the attacks.

“My father has been hospitalised as a result of the incident.”

However, the Ogun State chairman of Miyetti Allah, Abdulmumin Ibrahim, alleged that the attack on the Seriki Fulani’s residence and Kara market were carried out by Adeyemo (Igboho).

“He (Igboho) was also at Oja – Odan but one good Samaritan called Dende did not allow him to set ablaze houses at Oja Odan. A formal complaint has been made at Eggua Police station,” Ibrahim said.

READ  Falana to Atiku: Those who cornered Nigeria’s commonwealth shouldn’t talk of restructuring

The State Police Public Relations Officer, Abimbola Oyeyemi, confirmed the incident, submitting that the hoodlums only took advantage of Igboho’s visit to carry out the nefarious act.

The PPRO added that the state Commissioner of Police, Edward Ajogun, had visited the area for on the spot assessment.

“He (CP) had a meeting with the community and Fulani settlers. We had a very robust session and the two parties have resolved to work together to fish out those that are perpetrating crime therein.

“The CP has appealed to everybody including Sunday Adeyemo that we cannot fight crime with Illegality.

“He should allow justice to prevail and everybody to calm down pending when the whole thing will finally be resolved. Everybody has agreed to work together in all the places we visited yesterday aside Eggua where we have this carnage every other place. I think it is only in Eggua where maybe some people were aggrieved before his arrival and took the opportunity to vent their anger. So, we have appealed to him to tread softly. Peace has finally returned,” the PPRO said.