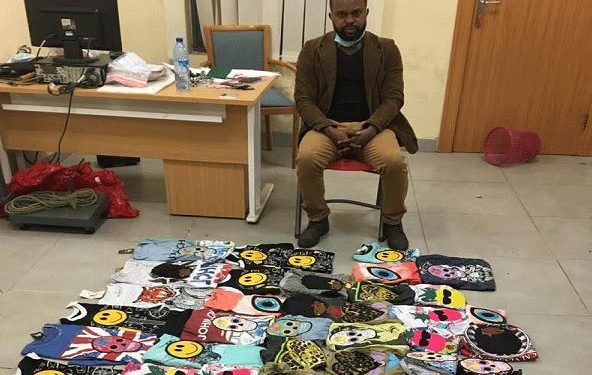 Officials of the Nigerian Drug Law Enforcement Agency (NDLEA) on Tuesday arrested a passenger with cocaine worth N7b at the Murtala Muhammed International Airport (MMIA).

Ukaegbu Bright Onyekachi, a passenger with Ethiopian Airlines from Guarulhos International Airport, Sao Paolo, Brazil via Addis Ababa, Ethiopia, was nabbed at the E-arrival wing of MMIA. It weighed 3.30kg.

Ukaegbu, however, claimed that he was unaware the drug was concealed in the check-in luggage allegedly given to him by a Nigerian based in Brazil.

Speaking on the arrest of the suspect, the Commander, MMIA, Ahmadu Garba, said the suspect concealed the drug in 68 T-shirts. He explained that the mode of concealment was ingenious.

He said: “The total weight of the seized drug is 3.30kg. It is not really a significant seizure when you compare it to the 8.5kg cocaine that was seized recently. But when you look at this seizure, the mode of concealment is very tricky. Our officials have to be experienced to discover this.

“Drug trafficking is a huge money business and definitely, anything that is money, people will want to do it. I want to say that the COVID-19 pandemic slowed them down and I want to believe they want to meet up with the lost time.

“However, during the pandemic, my officers had enough time to do some refresher courses, especially online. I want to say the training we had during this period had helped our officials to learn some of the ingenious ways they conceal these drugs.”

He added that the NDLEA under Gen. Buba Marwa as chairman would not tolerate any dastardly act.

In his confessional statement, Ukaegbu claimed the check-in luggage was handed over to him by one Kingsley in Brazil, who he had only met twice.

Ukaegbu, who said he was a cooperative attendant in Brazil, said he had been residing in the Southern American country for five years.

He maintained that he was unaware the T-shirts were laced with cocaine and appealed to the government to “temper justice with mercy”.

He said: “I was not aware that the drug was in my check-in luggage. The person that handed over the luggage to me told me there was nothing inside the bag. I thoroughly checked the bag for drugs. What I saw there were clothes for children and adults.

“He was someone I met there as a Nigerian and his name is Kingsley. I don’t have his contact and he promised that someone will come today (Tuesday) to collect the luggage from me. I didn’t have the phone contact of Kingsley.

He also said Kingsley did not promise him any amount of money for helping to carry the luggage to Nigeria.