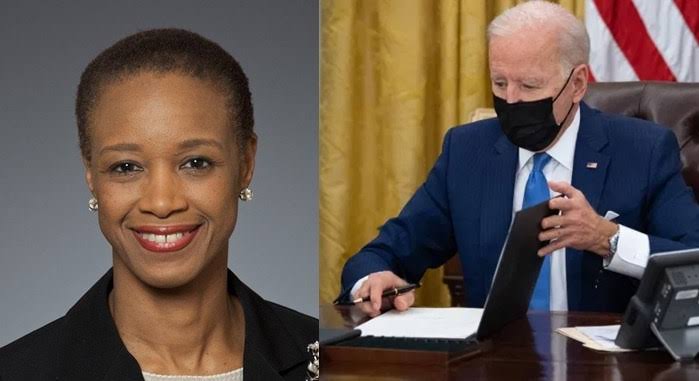 United States President Joe Biden has appointed Nigerian-born Enoh Titilayo Ebong as the acting director of the US Trade and Development Agency (USTDA).

“The appointment meant a return to USTDA where from 2004 to 2019, Ms. Ebong had served in a variety of roles, most recently as the Agency’s General Counsel, and Deputy Director and Chief Operating Officer,” USTDA said in a statement.

“As Acting Director, Ms. Ebong leads an agency that partners with the U.S. private sector to develop sustainable infrastructure and foster economic growth in emerging economies, while supporting U.S. jobs through the export of U.S. goods and services.”

Ebong had previously served as the head of strategic partnerships at the Milken Center for Advancing the American Dream.

She is expected to lead the agency in partnering with the country’s private sector in order to develop sustainable infrastructure and foster economic growth in emerging economies.

“It is an honor to return to USTDA,” Ebong said.

“The opportunity to lead the Agency comes at a critical moment when the world is turning to the United States for leadership on clean energy and climate-smart infrastructure, as well as safe and secure ICT solutions.”

She also noted that the agency is one of the most effective, targeted and proven tools within the U.S. government.

“I’ve longed believed in USTDA’s mission and program, which are fully aligned with the President’s vision of strengthening the country’s economy and addressing climate as an essential component of American foreign policy and national security,” Ebong said.

READ  President Buhari Has Failed, Even His Supporters Now Know He Has No Integrity Left - Adebanjo

Ebong grew up in Lagos, Nigeria. Her father, Ime James Ebong, was a Nigerian civil servant who served as permanent secretary.

She practiced law at the Boston office of Mintz, Levin, Cohn, Ferris and Popeo, P.C., representing public and private companies in public offerings, financing transactions, mergers and acquisitions, and corporate governance issues before joining the agency in 2004.

She is not the first Nigerian- American to be appointed by the US president. Adewale Adeyemo was recently announced as deputy secretary of the treasury department.

Biden also appointed Funmi Olorunnipa Badejo into his cabinet as white house counsel, as well as Osaremen Okolo as a member of his COVID-19 response team.