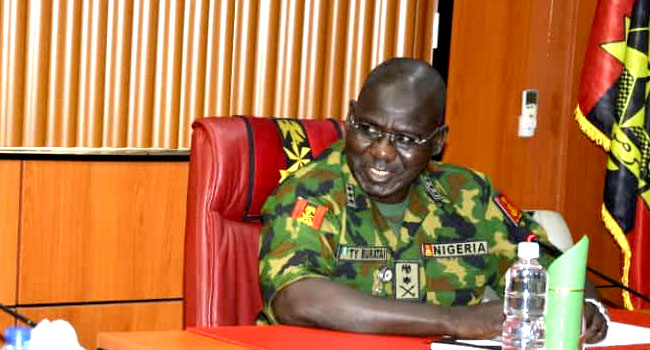 The recent nomination of the immediate past Chief of Army Staff, Lt. Gen. Tukur Buratai (rtd) as Ambassador-Designate by President Muhammadu Buhari has indeed put the country into frenzy. In some quarters, mostly the opposition members, they have questioned the rationale for such nominations citing several issues that defeat common sense. Also in some quarters, those that are well informed on the issues at stake in Nigeria with regards to winning the war against insurgency and other acts of militancy, they have praised the president for making such a decisive move towards ensuring that the experience of the former Service Chiefs is indeed available for use by the country, especially in the international scene.

I want to join forces with those that have seen the bigger picture with the recent nomination of Lt. Gen. Tukur Buratai ( rtd) as Ambassador-Designate for the fact that Nigeria would stand to benefit significantly from his wealth of experience and the vast network he has built while in service as the Chief of Army Staff.

Lt. Gen. Tukur Buratai (rtd) is a lesson in history on what patriotism entails. His passion and energy towards the Nigerian cause cannot be questioned by any well-meaning Nigerian conversant with how he led the Nigerian Army in the prosecution of the war against insurgency and other forms of militancy.

Therefore, it remains a no-brainer for Nigerians to see the nomination of Lt. Gen Tukur Buratai as a decision that would come with its attendant benefits in our quest for building and sustaining multilateral ties with countries of the world in galvanizing international support for defeating the Boko Haram insurgency in Nigeria.

What this nomination brings is that Nigeria would be able to tell the story of the efforts at defeating the insurgency in the country through someone that understands the undercurrents that have sustained Boko Haram for a long time. It would also allow Nigeria to tell the story at it is in the international community because the bulk of the information that the international community has relied on is from third-party sources that have been doctored or diluted to suit certain interest.

This is on the heels that the period Lt. Gen. Tukur Buratai held sway as Chief of Army Staff has been regarded as one of the most productive eras in the annals of the Nigerian Army in the sense that he introduced institutional reforms that if implemented would position the Nigerian Army in better stead to confront the security challenges in the country.

It is also instructive to state that the Nigerian Army was rated high in human rights compliance by various bodies under him. It is on record that in the Armed Forces; only the Nigerian Army has in all its units and formations Human Rights desks to address issues of human rights violations by officers and soldiers.

I cannot possibly explain the gains that would be accrued to Nigeria with this nomination, but what I can say is that Nigerians in the nearest future would come to terms with the strategic import of the nomination, and also with the realization that guns and tanks are not the only potent weapons to be deployed in asymmetric warfare such as the Boko Haram insurgency.

We must also understand the role of diplomacy, which is neither the invention nor the pastime of some particular political system but is an essential element in any reasonable relation between nations. For the upkeep of the International System, diplomacy is used in every corner of the world. Without it, many countries would not be able to conduct successful negotiations.

This fact indeed summarizes President Muhammadu Buhari’s position in nominating individuals such as Lt. Gen. Tukur Buratai and others, which in my opinion is intended to introduce the diplomatic dimension in the war against Boko Haram insurgency in Nigeria.

For Ambassador Tukur Buratai, this is indeed a new beginning, and a continuation of service to Nigeria and all eyes are indeed on him to bring to bear his wealth of experience in galvanizing the needed international collaboration in addressing the threats posed by Boko Haram in Nigeria.

This is also cognizant that the bulk of the reasons advanced by the international community for refusing to collaborate with Nigeria in the war against Boko Haram insurgency is harped on the negative narrative propagated by despicable elements in support of the festering of the activities of the Boko Haram insurgents.

I have no doubt on the ability of Lt. Gen. Tukur Buratai to deliver in this new assignment and I can’t but commend President Muhammadu Buhari in this regard. It consequently behooves on all well-meaning Nigerians to extend their support to the new and latest Ambassadors in town.