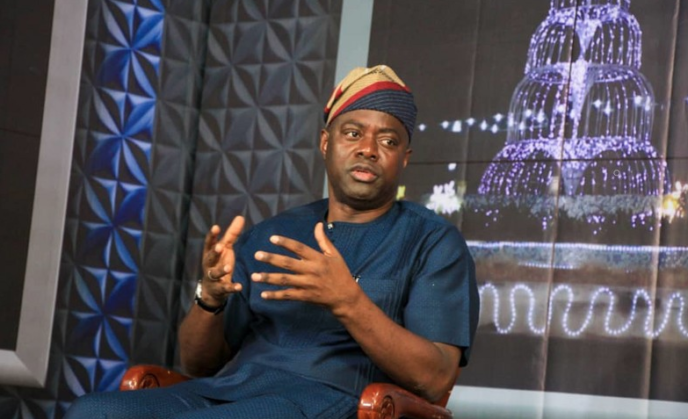 His exit was followed by comments by other participants in the group, with some saying they were disappointed that the governor could be so intolerant.

According to SaharaReporters, the crisis rocking the Oyo state chapter of the Peoples Democratic Party (PDP) has taken a new dimention.

It took another dimension on Saturday night as the governor of the state, Seyi Makinde, left the official WhatsApp platform of the party in the state.

The Publicity Secretary of the party, Akeem Olatunji, had earlier posted a video of an attack by suspected Fulani herdsmen on the people of Ayete, headquarters of Ibarapa North Local Government Area of the state on the WhatsApp group.

The video was calling on the governor to take urgent steps to save the people of Ayete from incessant attacks by Fulani herdsmen but the governor became angry.

Olatunji had commented on the video, saying, “This video has gone viral but the authority needs to confirm the claim. It’s very urgent to address the message…”

Reacting to the statement made by Olatunji, Makinde at exactly 10:07 pm, said, “Every time some idiots makes (sic) a video, the government must respond… I don’t get it really… you need mature people to make meaningful contributions on your platform.”

The governor also went on to react to another story regarding allegations of violence at the ongoing All Progressives Congress (APC) membership revalidation/registration.

Governor Makinde asked; “What is the relevance of this on the PDP official platform?”

He then exited the platform.

His exit was followed by comments by other participants in the group, with some saying they were disappointed that the governor could be so intolerant.

“I’m highly disappointed sir, we don’t expect this from you.

“Leaders who are low on accommodating may have trouble building up goodwill with other people,” Hon Samuel Okunlade, Chairmen of Orelope Local Government Area, Igboho, said.

But Kunle Yusuf, Special Adviser to the Governor on Sustainable Development Goals, tackled Okunlade, saying, “Please let us stay clear from the issue, we should be careful with the information we share on this loop.”

One Gbade Adediran however took Kunle Yusuf up, telling him that it is important to speak the truth to power and that people on the platform should act maturely.

He said; “I agreed (sic) with you, but sometimes we need to say the truth, we only need mature people on this platform, we need to respect ourselves, Ajurawalo ti ijakadi ko.”

Meanwhile, a chieftain of the PDP in the state, Bola Akinyemi, has alleged that the state executive council of the party, led by Alhaji Kunmi Mustapha, is not helping Makinde to succeed, saying the governor is only being told what a cabal feels he should hear and not the truth.

According to him, “Is the State Executive telling us that those people who sacrificed all to ensure that the governor emerged should be thrown away from the party simply because he had a photograph with Eddy Olafeso? Is Eddy Olafeso not a member of the PDP?”

Continuing he said, “That Taiwo Iyiola took a photograph with Eddy Olafeso is not an affront on the governor. It behoves my brother, the governor, to open up. For now, he is not and I am afraid for him. He is not opening up. These days, there is a cocoon that is covering up the governor, that you cannot talk to the governor as you wish. What is wrong if the governor calls his chairman (Iyiola Taiwo)?

“That he took pictures in the sitting room of Alhaji Bisi Olopoenia with Eddy Olafeso, is it an anti-party activity? Is Alhaji Olopoenia not in the PDP? Is Eddy Olafeso not in the PDP? I am not concerned about the personal grouse of Alhaji Olopoenia and Governor Makinde. I don’t know how and when it started and it will be stupid of me to want to interfere in what I don’t know when it started but what we are saying is that this person attended a meeting in a PDP chieftain’s house, has the governor called these chairmen to tell them this is where we are going?

“It was this same Eddy Olafeso that the governor used to hijack the PDP structure a few years back and that made former Governor (Rasheed) Ladoja leave the party then so, if the governor has an issue with the same man today, they should resolve it.”

He advised the governor to reshuffle his cabinet urgently to accommodate experienced politicians.

“As I said on this radio, I wish the governor had someone versatile as his Special Adviser on Political Matters, a lot of problems would be taken off his neck.”

On the street credibility claim of Makinde, he advised him not to get carried away, pointing out that a former governor known to be popular lost election twice.

“How many of those who are hailing the governor on the street have voter cards,” he retorted.

“Ordinarily, it is a failure of political calculation if we have people in Oyo State who will not queue behind Governor Seyi Makinde and that is why I tell you that infrastructurally, Governor Makinde is doing wonderfully well but politically, he is not getting things right.

“They make the governor hear what they want him to hear and not what he should hear.

“One of the success stories of Governor Adebayo Alao-Akala is Doctor Saka Balogun. He would meet him in the evening and tell him Bayo, all you did in the morning are yours. Things cannot go that way and he would explain things to him.

“Unfortunately, there is nobody in this government that is helping my brother, the governor, to do that. Everybody is just saying this is what Oga wants. No! It is not every time that it should be about what Oga wants.”

On how the State Executive Council is also allegedly not helping the governor, he referred to the perceived lukewarm attitude of the council to genuine reconciliation efforts within the party.

“There is the constitution of the party and let me tell you, members of the State Executive Council are not helping Governor Seyi Makinde at all,” he said.

When pressed to be explicit, he asked, “What have they done to bring the aggrieved juggernauts within the party together to settle the crisis in the party?”