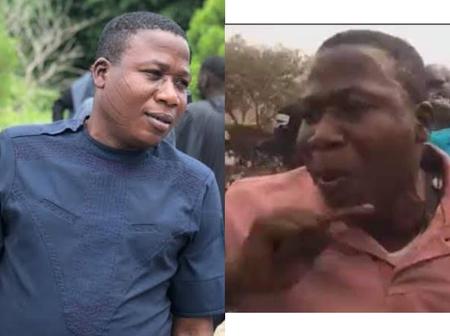 He stated that he remains undeterred in his quest to liberate the South-West from killer herdsmen despite concerns over his safety by family members.

Sunday Adeyemo, the famous Yoruba freedom fighter, who is popularly known as Sunday Igboho, has said he is not stopping.

He stated that he remains undeterred in his quest to liberate the South-West from killer herdsmen despite concerns over his safety by family members.

In recent weeks, Igboho has been in the news for asking herders, allegedly responsible for farmers-herders’ crisis, to leave some communities in Oyo and Ogun states.

After his visit to Igangan in the Ibarapa North Local Government Area of Oyo State, the house of the Seriki Fulani in the area was razed by angry youths.

In what seems like a reprisal, one of Igboho’s houses in Ibadan, the Oyo State capital, was gutted by fire by unknown persons.

In an interview with PUNCH on Sunday, Igboho said no human being can kill him and he will not be distracted.

The Yoruba warlord was quoted as saying, “I am not afraid of anything or anyone but God. God is the owner and controller of every soul. It is only God who can kill me. No human being can kill me, so I cannot be afraid of any mortal.

“My children challenge and persuade me to quit every day. They wave the caution sign to me every time. My wife is also very worried about the cause that I fight for but I have to do this for the liberation of my people, anyway. But I am equally worried about my people who are being dehumanised and oppressed in their own territory for no just reason. Those who should address the issue just fold their arms and watch because they have been compromised. This struggle is for the good of all so that when I am gone, they will not live in subjection.”

READ  Fulani Own All The Lands In Nigeria And No Power Can Remove Us From Ondo Forests, Says Miyetti Allah Leader

The governor of the state, Seyi Makinde, had kicked against the quit notice issued by Igboho to Fulani people in the Ibarapa Local Government Area of the state.

Commenting on the development, Igboho said he can work in harmony with the governor inasmuch as “he recognises the fact that we have the fundamental right to secure our people and to protect their interest.”

The activist said he was ready for meaningful discussions surrounding the burning issue of security and to end the impunity enjoyed by killer herders.

He said he was only after stopping the killings and kidnappings of Yoruba people by the marauders.

He added: “We are sure that the governor is able to feel the pulse of the people who are feeling the heat from the killer herdsmen and we believe that he will rise up to the occasion and do the needful.

“If they call me for a meeting to discuss the burning issue of security to end the impunity by the killer herders, I shall gladly oblige. I am ready for any genuine approach to stopping the herders’ madness against our parents, brothers and sisters in Yorubaland. Why should our people, harmless for that matter, be going through all the horrible experiences without getting justice? And everybody folds their arms, looking on as if nothing is wrong.”

He called on Yoruba people to be united and stop playing politics with the lives of the people.

He said royal fathers, politicians, the youth and the elders should speak in one voice, with no discord in Yorubaland.

According to him, Yoruba leaders should remember “that the first Oyo Empire was mowed down by this same set of people. The second Oyo Empire at Igboho, Oyo was equally destroyed by the same people. This time, our people must be protected by all Yoruba people.”