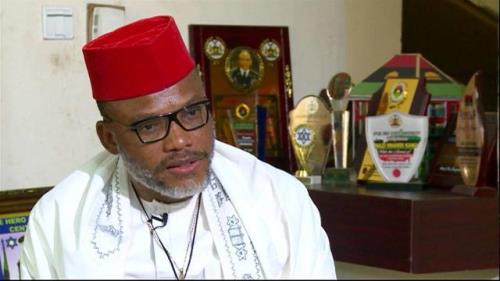 The leader of the Indigenous People of Biafra, IPOB, has reacted to Governor Nasir El-Rufai’s admission to the atrocities being committed by Fulani herdsmen across the country.

The Kaduna State Governor, had in an interview with the BBC Hausa, said that Fulani herdsmen who carry out banditry kill ‘mercilessly’ because they do not believe in religion.

“…We cannot negotiate [with bandits]. Eliminating them is the only solution to banditry,” El-Rufai said in reaction to Islamic cleric, Sheikh Gumi’s move to persuade the criminals to drop arms.

“I never believed that a Fulani herdsman who ventured into banditry and is collecting millions of Naira as ransom will repent. I spoke to Dr Gumi, who is my friend; I explained that the majority of these bandits don’t believe in the religion. That is why they kill mercilessly.

“Anybody who thinks a Fulani herdsman that was used to only getting N100,000 in a year, after selling a cow, but now is getting millions through kidnapping for ransom will stop is only wasting his time,” El-Rufai said.

And his reaction, Nnamdi Kanu tweeted, “@elrufai a Fulani admitting that those perpetrating kidnapping in Nigeria are Fulani. But when we use exact same term to describe Fulani terrorists, we are accused of ethnic profiling.

Speaking further, Nnamdi Kanu noted that the entitlement mentality of the North caused the 1966 civil war and warned that the country is most likely to enter another one.

“NIGERIA was doomed from the start when control of the nation was ceded to those with a medieval mindset.

“It created an entitlement mentality that triggered a Civil War & is now threatening another. Trust me, the War shall come, sooner than later, unless Nigeria is divided NOW!” He added.

Also, Nobel Laureate, Wole Soyinka, had at the weekend warned that activities of Fulani herdsmen in the Southern part of the country may become uncontrollable and generate into another civil war.

Herdsmen are being accused and in some cases evicted by their host communities over allegations of killing, kidnappings, raping of women, as well as destroying farms with their animals.

Soyinka called on those in authorities to act urgently before the situation gets out of hands and lead to another civil war. He accused President Muhammadu Buhari of keeping mute over the ‘illegal’ activities of herders.’