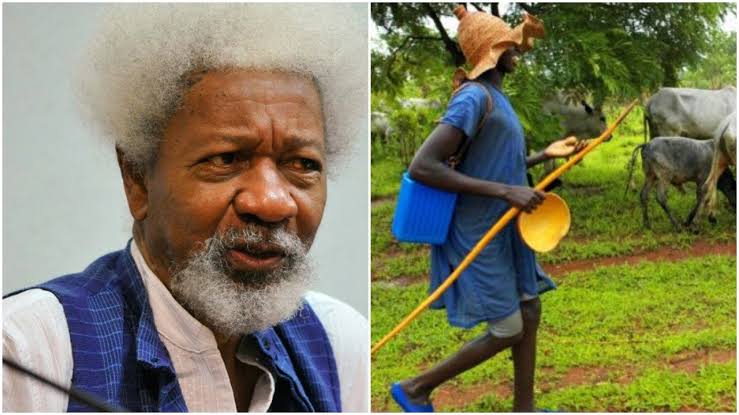 The Ogun State Command of the Nigeria Police Force has debunked trending rumours that Nobel Laureate, Professor Wole Soyinka was recently attacked in his house by some Fulani herdsmen.

The spokesperson of the command, DSP Abimbola Oyeyemi in a statement on Wednesday evening issued on behalf of the Commissioner of Police in Ogun State, Edward Awolowo Ajogun told members of the public that Soyinka was not attacked.

The statement confirmed that there was an encounter between Soyinka and a herdsman but denied any form of attack on the Professor.

The Police narrated that what happened was simply a case of a strayed cattle and an attempt to locate it. It added that both the DPO of the area and the Commissioner of Police have visited the area for on the spot assessment and there is no cause for alarm.

It noted that the video suggesting any form of attack on the Professor or an attempt to kill him is purely the handiwork of mischief-makers who want to cause unnecessary panic.

The statement noted that: “Yesterday Tuesday 9th of February 2021, one Kazeem Sorinola an indigene of Ijeun Abeokuta who is into cattle business said to have been informed by a young Fulani man Awalu Muhammad who is taking care of the cattle that one of the cows had got missing.

While the Fulani man was searching for the stray cow around kemta estate where Prof Wole Soyinka’s house is located, the Prof. himself who was going out then saw the Fulani man with some of the cows and he came down to ask where the man was heading to with the cows. He there and then asked the Fulani man to move the cattle away from the vicinity.

The DPO Kemta division, who heard about the incident quickly moved to the scene with a patrol team and the owner of the cows was invited to come with the Fulani man in charge of the cattle. The duo were questioned and properly profiled. The entire place was inspected by the DPO and it was established that it was just a case of stray cow as nothing was damaged or tampered with.

It was, therefore, a thing of surprise to see a video trending on social media that the respected Professor Wole Soyinka’s house was invaded by Fulani herdsmen with the view to attack or kill him.

The video is nothing but a calculated attempt by mischief makers to cause panic in the mind of people. There is nothing like invasion of Prof Wole Soyinka’s house or any form of attack on his person.

The commissioner of police CP Edward Awolowo Ajogun has been to the scene for on the spot assessment, and he personally interviewed the owner of the cattle Kazeem Sorinola, as well as the Fulani man who is in charge of the cattle and their statements show clearly that the mischievous narrative of invation is nothing to take serious.

The command hereby wishes to warn the fake news peddler to desist from it as they may be made to feel the weight of the law. It is an offence for anybody to originate or help in circulating fake news, the command will, therefore, henceforth be tracing and fishing out those deliberately dishing out fake information to members of the public especially the one that causes panic in the mind of innocent people.”