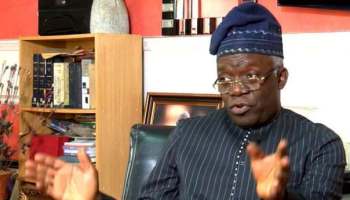 Femi Falana (SAN) has stated that the Central Bank of Nigeria (CBN) lacked the power to appeal the court judgment unfreezing the bank account of 20 #EndSARS campaigners.

Recall that the order to freeze the bank accounts linked with some promoters of the #EndSARS protest was on Wednesday set aside by a Federal High Court in Abuja.

In a ruling on Wednesday, Justice Ahmed Mohammed ordered all concerned banks to immediately unfreeze the affected accounts.

The presiding judge said the ruling follows the withdrawal of all processes filed in relation to the suit by lawyers to all parties.

Justice Mohammed proceeded to strike out the suit filed by the Governor of the Central Bank of Nigeria (CBN), Godwin Emefiele, and in respect of which the ex-parte order freezing the accounts for 180 days was made on November 4, 2020.

Speaking on Channels Television on Thursday after the ruling, Falana urged the CBN to desist from jumping into the political terrain and mind its sole business of banking.

He also revealed that his clients would drag the Federal Government and the CBN to court for trampling on their rights by unlawfully freezing their accounts last October out of “sheer intimidation”.

He said, “In October last year, the Central Bank of Nigeria went out of his way to obtain an ex parte to freeze the accounts of 20 #EndSARS protesters. The Central Bank asked to investigate the 20 people for alleged money laundering, terrorism and sundry offences. Instead of 180 days, the court gave the CBN 90 days to commence and conclude investigation into the accounts of the activities of these young men and women.

“By last week, February 4, the order expired and we were in the court yesterday (Wednesday). Of course, the Central Bank had attempted to renew the order but you cannot renew an expired order. If you wanted to renew, you should have renewed when the order was valid and subsisting. So, the court decided to strike out the case yesterday because both sides withdrew all applications.

“I do hope sufficient lessons have been learnt particularly by the Central Bank to desist from jumping into the political arena by attempting to freeze the accounts of people who are involved in a struggle because when a Central Bank does that, you have left the business of banking and then strayed into the political terrain and it is a dangerous terrain.”