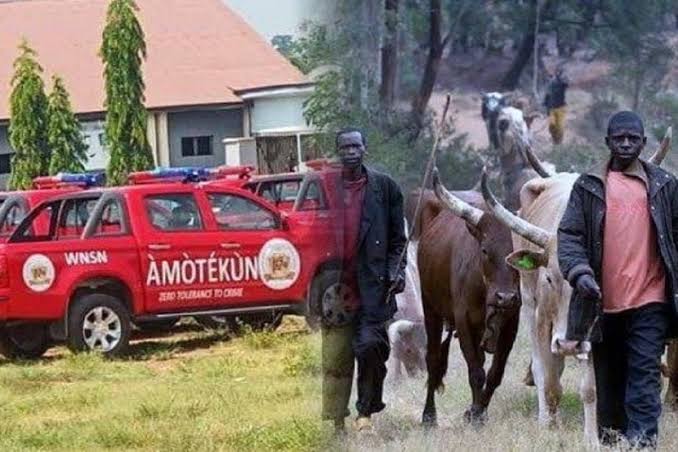 The command Police Public Relations Officer, Olugbenga Fadeyi, made this known in a statement on Friday. He was, however, silent on the alleged shooting of another Amotekun operative by a Divisional Police Officer (DPO).

Fadeyi said the police only responded to a report from the Secretary of Miyetti Allah Cattle Breeders Association (MACBAN), Oroji Allah, on an alleged plot by the Amotekun operatives to burn down the Gaa Fulani in Orile Igbon.

Fadeyi explained the team of officers was sent to the scene to bring the operatives to the station so that the matter could be resolve by the DPO.

He alleged Amotekun operatives, numbering about 30, later invaded the station and conducted themselves in an unruly and riotous manner.

Fadeyi said: “It was a report from the Secretary of Miyetti Allah, one, Oroji Allah ‘m’ at Orile Igbon Police Station that some Amotekun operatives planned to set ablaze Fulani Igaa.

“A team of Policemen was sent to the scene and brought them to the station for amicable settlement by the DPO.

“Not too long, Amotekun corps numbering about 30 invaded the station and conducted themselves in an unruly and riotous manner.

“Three of them were arrested and the Area Commander Ogbomoso is handling the matter.”