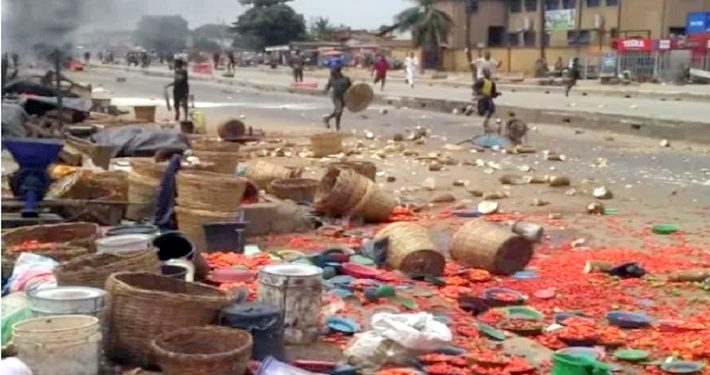 The popular Shasha Market, Ibadan was a ghost of itself Saturday as traders, workers and other stakeholders deserted the once bubbling raw food market for fear of being attacked by irate youths from both Hausa and Yoruba communities.

In what seemed like a reprisal attack, youths of Yoruba extraction grouped to attack members of the Hausa community in the area.

But Hausa youths also grouped to repel them.

The moves and counter moves led to the burning of some shops with casualties from both sides.

Despite the deployment of security personnel to the troubled area, a confrontation between the two groups continued overnight on Friday leading to the burning of no fewer than 50 shops the market. Some of the shops were looted.

The shops belong to traders dealing in raw food, groceries, fabrics, groundnut oil and plastics, among others. Some of the wares were also scattered in the market as at press time.

However, security personnel, mainly members of the state’s joint security outfit codenamed Operation Burst, were at the market to quell the riot while policemen manned the main gate of the market.

Members of Operation Burst outfit were mainly soldiers and civil defence corps. All of them were also there to enforce the 6 pm to 7 am curfew imposed by the state government.

The market has been closed down by the government to prevent a breakdown of law and order. Civil defence and soldiers from Operation Burst police manned the main gate. Residents gathered in front of their houses.

When The Nation visited the market Saturday, some residents lamented the crisis, saying it was already taking tolls on them.

One of the victims whose shop was looted and burnt, Kazeem Olona, said he suffered huge losses. He accused the security personnel of preventing Yoruba youth from repelling others who set the shops ablaze. He said no fewer than dour people were killed in the attack.

Abiodun Adeyi, officials of the Oyo State Park Management System (PMS) at Shasa Motor Park, also said that the incident has adversely affected their work because passengers were no longer coming to the motor park since the incident started.

“We are calling for the quick intervention of the government on this issue before it gets out of hand. Governor Makinde should give more power to Amotekun corps for them to perform their duties effectively in protecting lives and property,” he said.

Meanwhile, the Police Public Relations Officer (PPRO) in the state Mr Olugbenga Fadeyi denied that many people died in the attack.

He said: “I don’t have such a report. The report is having with me shows that only one person lost his life during the incident, except if I have another one from the Divisional Police Officer (DPO) in the area. If anybody is killed, then there should be an official report by the family of the deceased, not just hearsay.”