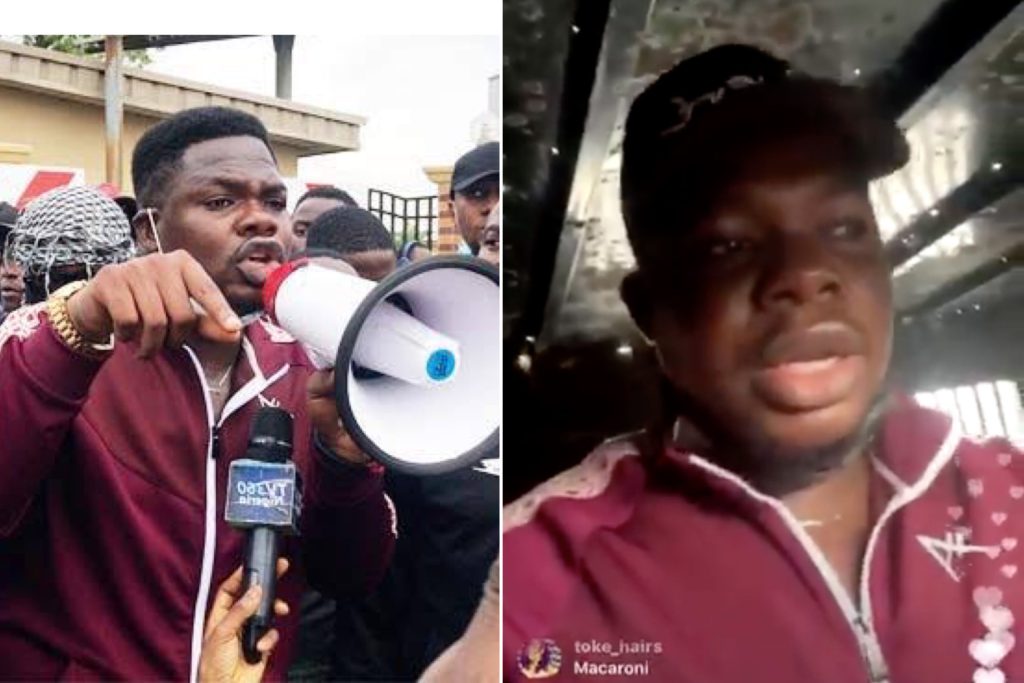 Ace comedian Debo Adebayo, popularly known as Mr Macaroni, has explained why he joined other #OccupyLekkiTollGate protesters on Saturday.

The comedian, who was arrested alongside other protesters in the early hours of Saturday, said he was initially scared and had received numerous calls from his parents, siblings and friends not to join the protest.

In a video, which he posted on his official social media platforms, Mr Macaroni said he initially did not want to go out but he later joined the protest because he knew people would be there.

He alleged his phones were destroyed after he was arrested and also had bruises all around his body because he was beaten by security operatives.

“The only reason I went there is because I knew people would be there and in good conscience, I don’t know …

“But I knew people would die and I saw it, and I can confirm it that if words did not get out, people would have died because nobody would have known where anybody was or who picked up who.

“The country’s current situation is a ‘deep shit’, everyone is scared for their lives. When we were picked up, we were taken to Adeniji, we were beaten and stripped naked,” he said.

He called for unity, especially among celebrities urging people to desist from creating division among them on basis of who joined the protest or not.

He said the other 39 persons who got arrested stood their grounds.

“These 39 people gave me the ginger to join the protest. They are the real heroes.

READ  “I’m Not Under Pressure To Marry” – Actress, Funmi Awelewa

“They were not out to fight but just to ask why the toll gate should be opened,” he said.

He alleged the police officers, who arrested the protesters, said they would have killed them but everyone had known of their arrest.

He dismissed allegations that he was being bankrolled by anyone, stressing he has never collected money from former Vice-President Atiku Abubakar or anybody to protest.

Mr Macaroni thanked the youths for speaking up and also expressed gratitude to Nigerians who rallied support for him and other protesters.