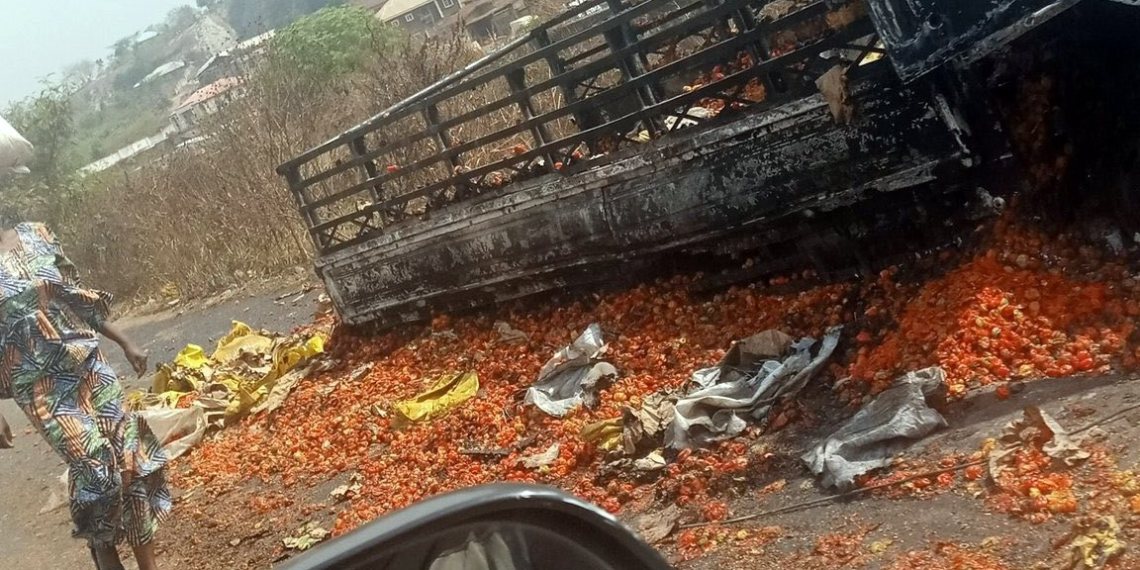 Several people have lost their lives after a clash triggered by the fatal stabbing of a cobbler by a cart pusher in Sasha market, Ibadan, Oyo State, degenerated into an ethnic conflict.

The ethnicity of the two men and there is no evidence that their fight was caused by ethnic issues.

The stabbed victim was confirmed dead in a hospital on Friday morning, leading to crisis in the community between the Hausa and the Yorubas, with the latter group trying to avenge the death of their tribesman.

Within hours, the conflict spread beyond the market, as the Hausa and Yoruba communities in Akinyele Local Government Area, where the market is located, went after each other.

Pictures of destruction during violent killings in Ibadan.

At least, six people died from both sides in the reprisal attacks. Various shops and houses were burnt while the market was deserted in the process.

“The reprisal attacks have led to the death of at least six people from the side of the Yorubas and the Hausas. In fact, many people in the community have scampered for safety,” a resident of Akinyele, who simply identified himself as Khalid, said.

“No one is safe. People have been rendered homeless. I know of 15 houses that have been razed and you can’t tell if your home is next. What matters is safety, so people have deserted their homes”.

Sources told this newspaper that those who were identified as Hausa were forced out of vehicles and attacked by the hoodlums.

“Once you are an Hausa person, you will be dragged down from the car and be killed by the Yorubas who ordinary to them were avenging the death of the cobbler killed by a Hausa man,” a witness, who said he saw several lifeless bodies at Moniya area of Ibadan.

As the killings continued, the military stormed the community in an attempt to stop the reprisal attacks and destruction of properties.

Speaking on the incident, the Oyo State police spokesperson, Olugbenga Fadeyi, who confirmed the incident, said normalcy is gradually returning in the area.

“Massive Police deployment and that of the sister security agencies were made to douse tension. Critical stakeholders have also been consulted to appeal to the people.” In order to forestall breakdown of law and order in the market and its environments, Governor Seyi Makinde on Saturday imposed an indefinite curfew in the area.

The governor in a statement by his Chief Press Secretary, Taiwo Adisa, said anyone caught perpetrating violence will face the wrath of the law.

“His Excellency, Governor Seyi Makinde has directed the immediate closure of Shasha market indefinitely following reports of a breach of peace in the area.

“The governor has also approved the imposition of (a) curfew on Shasha. It will run from 6 p.m. to 7 a.m. Residents of the affected area are enjoined to go about their legitimate businesses within the hours stipulated by the law.

“Anyone caught disrupting the peace of the community will be made to face the wrath of the law,” the statement read. The governor of Ekiti State, Kayode Fayemi, and his counterparts in Ondo State, Rotimi Akeredolu, urged citizens not to allow a misunderstanding to degenerate into violence, maiming, and killing.

READ  Teenage Girl Shot Dead After Mother Went To A Bar To Have Fun.

“We will enjoy enduring peace and progress through dialogue, mutual respect, and understanding for one another. Violence and attendant death and destruction would only spell doom for the country.

“While commending Governor Makinde for his timely intervention in the crisis, we also express our sympathy to families of the victims as well as those who have lost properties and businesses during the crisis,” Mr Fayemi, the Chairman of the Nigeria Governors Forum, said.

The Olubadan of Ibadanland, Saliu Adetunji, in a statement also urged people to eschew violence and bitterness by ensuring that minor conflicts do not degenerate to unnecessary tension.

He said “many of our compatriots have been living with each other for a long time. We grow up and attend schools together. People from diverse ethnic groups do inter marry and give birth to lovely children.”

Speaking on the crisis, he said “immediately the report of the crisis got to us in the palace yesterday (Friday), the Governor of Oyo State, Engr. Seyi Makinde was the first person I called and we have his promise that appropriate action would be taken as sinners would not go unpunished,” the monarch said. In response to the clash, Nigerians on social media have been trending #StopKillingNortherners hashtag on Twitter.

Some of the tweets are as follows:

Reminder; Yesterday, Yoruba boys went on rampage on northerners in Oyo state Burning trailers, destroying shops, killing & burning any Northerner in sight and the president & Nigeria media are silent about about it! Use your keyboard to keep spreading it #StopKillingNortherners

Let's keep it going, just retweet and tweet anything with #StopKillingNortherners until we're heard! We need JUSTICE! pic.twitter.com/6meKwcR6ek

If u still defend this government after all we have seen , you r an abomination to mankind

we've not forgotten the gruesome killing of our people and the destruction of their properties by Yoruba thugs in Ibadan of Oyo State, Hausa people were burned alive yesterday and the government is still mute about it, we need justice, Enough is enough. #StopKillingNortherners pic.twitter.com/k84ht6cbFY

I never planned to spend my whole day online but i can fold my hands seeing how our brothers being massacred in Southern States but no one is speaking up or ready to take action among our Northern Governors, Reps, Senators or even the President. #StopKillingNortherners

As we woke up today our thoughts and prayers are with the innocent northern Muslims being killed yesterday in oyo state. An unforgettable day for the northerners. remember, We won't stop raising our voices until the government act and do the needful. #StopKillingNortherners