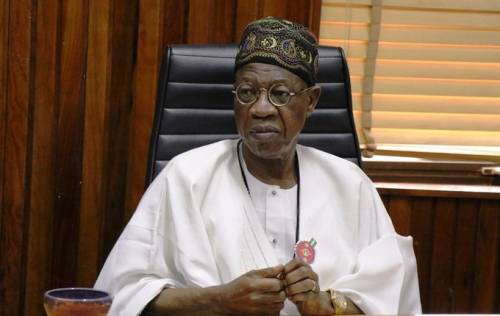 The All Progressives Congress (APC) has condemned the Minister of Information and Culture, Lai Mohammed, for calling for the cancellation of the party’s revalidation exercise in Kwara State.

Speaking to PremiumTimes on Monday, the APC deputy national publicity secretary, Yekini Nabena, advised the minister to put himself in the position of the governor and submit to his leadership of the party in Kwara.

Recall that Lai Mohammed had at a press conference on Monday in his hometown, Oro, said the committee supervising the exercise in the state should also be disbanded.

Reacting, Nabena Mohammed should submit to the leadership of the governor in the state instead of condemning the registration exercise.

“It is not business as usual. Nobody can monopolise the system. The minister should submit to the governor. He should put himself in the position of the governor too,” he said.

On discrimination in the distribution of materials, the party spokesperson said there was nothing of such.

“No one is using notebooks. There is a party register in every unit across the country,” he said despite multiple pictures proving him wrong.

Lai Mohammed had alleged that the registration exercise is not in order in the state and hence the need to cancel it.

The APC chieftain after completing his revalidation exercise at the Unit PU006 in Oro Ward 2, said that the registration materials dispatched to the state were not delivered to the registration units while the seven-member committee headed by Senator John Danboi did not meet with the stakeholders of the party.

READ  Fayose collapses as policemen fire teargas at him (PHOTOS)

Mohammed alleged that the seven-member committees disappeared into thin air on arrival in the state.

He said, “Since their arrival in Kwara State, the seven-member APC Membership Registration Committee for Kwara, led by Senator John Danboyi, seems to have gone underground. They have not had any useful interaction with lawful members of the state EXCO as well as party leaders and other stakeholders, including local government Chairmen and their executives and Ward Chairmen and their executives. These are lawfully-constituted party executives that the registration guidelines stipulate should not only be consulted but carried along during the exercise.

“The guidelines stipulate consultation with all stakeholders by the Registration Officials from Abuja. After the botched attempt to have a meeting of stakeholders, due to orchestrated violence, the Registration Officials failed to consult with all stakeholders before the commencement of the membership registration exercise, opting instead to work with only one of the four tendencies here in Kwara, the Fagbemi Group to which the Governor belongs, thus excluding the three other tendencies – The Akogun Group, the Gbemi Saraki Group and the Lai Mohammed Group, without which the ‘O To Ge’ Movement would not have succeeded.

“Ironically, the Fagbemi Group is the weakest of the four tendencies. Out of the 193 wards in the state, the group has only nine ward chairmen and does not have even one local government chairman. Even at the state EXCO, the Fagbemi group has only four members. Also, the recruitment of officials for the registration has been a one-sided affair and indications are that the hand-picked officials are under strict orders ‘from above’ as to how to carry out the exercise. We have evidence to corroborate this.

The implication according to him is that the registration was carried out without Party Membership Register.

He further alleged that temporary membership slips supposed to be signed and detached from the forms after registration were not being given to those who have purportedly registered.

Mohammed insist that the APC Membership Registration Exercise in Kwara State should be cancelled and a new process should be adopted to ensure the conduct of a credible and fair exercise that will enjoy the support and confidence of all.