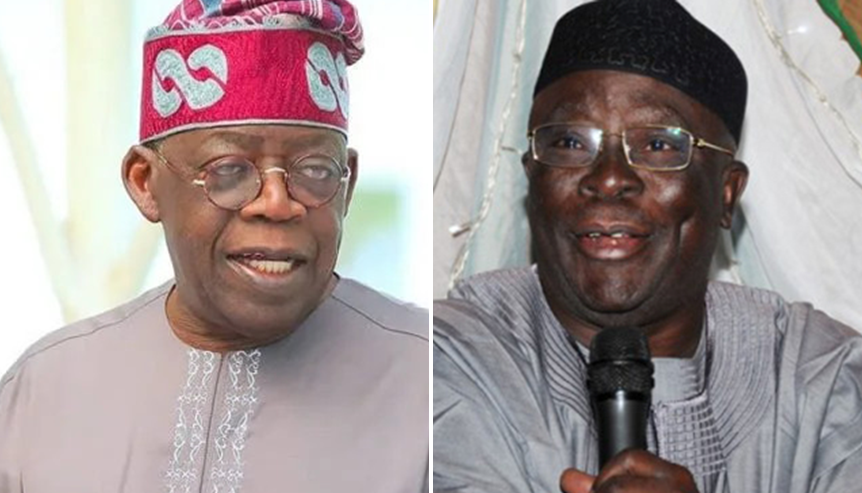 Elder statesman and Afenifere chieftain, Chief Ayo Adebanjo, on Tuesday said Ni­gerians should not be fooled by those saying Asiwaju Bola Tinubu, former Lagos State governor, will restructure Nigeria if he becomes presi­dent in 2023.

President Muhammadu Buhari has refused to imple­ment the report of the 2014 National Conference which was set up by his predecessor former President Goodluck Jonathan, comprising emi­nent Nigerians from across the country.

The ruling All Progressives Congress (APC) also set up the Committee on True Federal­ism in 2017. The committee had submitted its report since January 2018 but the party has failed to implement it.

“Tinubu cannot restruc­ture Nigeria even if he becomes president tomorrow. Don’t let anyone deceive you about that. I have told Tinubu that if he wants to become president after the constitution of our people have been made, that is another matter but definitely not under this current consti­tution”.

Adebanjo, who also said he won’t support Tinubu if he solicits his support for the 2023 presidency, added that the 2023 may not hold unless Nigeria is restructured. Ac­cording to him, recent devel­opments in the country have pointed to the fact that Nige­ria may not survive the 2023 general elections.

“If Tinubu declares for president tomorrow and seeks my support, I won’t sup­port him. I have told him that even if they choose my son as president under this constitu­tion, I will oppose him. This is an obnoxious constitution. It is a constitution by the North­ern elite to oppress the South. All the things that are causing conflict in the country today is in the constitution made by the military”.

On why he is opposed to Tinubu, Adebanjo said Tinubu betrayed the Yoruba nation over his continued si­lence on the crisis rocking the South-West as a result of the nefarious activities of killer herdsmen.

“All these things they are doing against the South-West now, what is Tinubu saying about it? He can’t talk. That was why I said he is deceiving Buhari and Buhari is also de­ceiving him”.

He also said he has never demanded money from the APC national leader at any point in time, challenging him or any of his supporters to provide any evidence if they believe he did.

“Tinubu’s supporters have claimed that one of the reasons why we parted ways was because he likes spending money for people while elders like us are stingy. That is true and I have challenged him that if I were to ask for mon­ey, how much did he give me before I took the action that made him governor? The late Ganiyu Dawodu as the state chairman of Lagos State AD had already forwarded the name of Funsho Williams as winner of the primary. I overturned it as the national chairman”.

“When there was a dispute between him and Dawodu, the woman he called his moth­er, Alhaja Abibatu Mogaji, whom I have known since Ac­tion Group days phoned me to intervene. I told her ‘Alhaja, you know me. I am standing for truth. Ask your son, did I get a penny from him before I recognised him?

“When he was trying to undermine his then deputy, Kofoworola Bucknor-Akerele, and we told him that he can’t do that. I also spoke with Kafa­ru Tinubu and I said ‘Kafaru, if I ask you for N20 million at that time, won’t you give me? He said I will give you. I then asked ‘why can’t we talk to this boy (Tinubu)?

“That is how no matter how much I criticise him, he will only reply me back through his boys who are his mouthpiece. He will never re­ply me directly. I stood by him through thick and thin on principle, not for any material gain. He can’t say ‘Papas, stop threatening me because this is how much I gave you’. That is the integrity I’m selling.

“When he was governor, he was stubborn on certain issues. So, during Christmas, he gave myself, Papa Abra­ham Adesanya and Olanihun Ajayi cows as Christmas pres­ent, but we returned them to him. We told him we won’t accept his gifts because we talked to him but he refused to listen”.

“On a certain occasion when he brought Christmas present, I told Tunde Rahman, his media aide, who brought it that if I reject this gift now, people will say this man never forgives. That was how I col­lected the gift”, he said.

Adebanjo also took a swipe at Vice President Yemi Osin­bajo on the claim by some Nigerians that he was hand­icapped to speak on restruc­turing. He said when the issue of restructuring was being canvassed across the country, Osinbajo said the agitators were political jobbers.