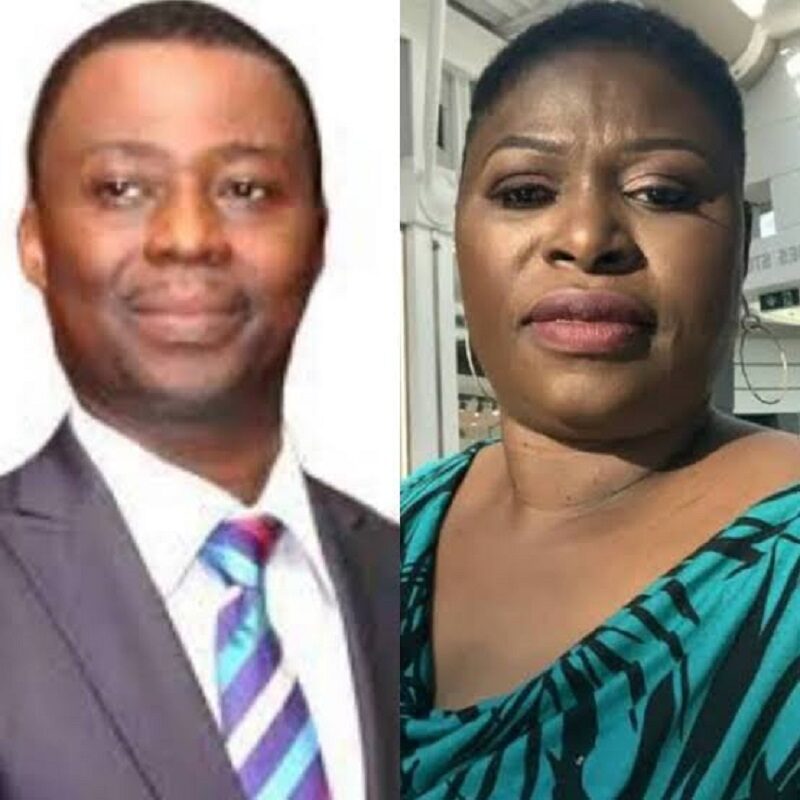 An Ogun State High Court of Justice, holden in Abeokuta, Nigeria, has slammed N500,000 million damages against a U.K.-based blogger, Maureen Badejo for libelous publications through her GIO TV against the General Overseer of Mountain of Fire and Miracles Ministries, Dr. Daniel Olukoya, and the church.

The claimants are the Incorporated Trustees of Mountain of Fire & Miracles Ministries and its General Overseer – Dr. D. K. Olukoya.

Badejo, who is the anchor person at the Facebook-based GIO TV, had before the judgement, churned out 52 lies against Dr. Daniel Olukoya.

Ruling in a N10billion libel suit against the said Maureen Badejo, the presiding judge, Justice Abiodun Akinyemi, awarded N250million to each of the Claimants (making a total of N500million) as aggravated and exemplary damages for libel.

Justice Akinyemi, in the ruling, frowned at Maureen Badejo’s ruthless campaign against the Claimants and described it as the worst case of reckless defamation and evil use of the internet and social media.

The Court also ordered the Defendant (Maureen) to “immediately pull down and erase each of the offending online publications/posts concerning the Claimants from the internet.

“Tender a written apology and retraction of the offending publications and posts in a form and content acceptable to the Claimants and published prominently in her Facebook, You-Tube and Instagram accounts and in at least three nationally circulating newspapers in Nigeria and two international magazines including Time International, FORTHWITH, and;

“Perpetual Injunction restraining the Defendant (Maureen) by herself, her agents, servants, privies or other persons howsoever called or described from further making, publishing and/or disseminating defamatory stories and statements about the Claimants or any one of them.”

Reacting to the judgement and media inquiries on whether Maureen was aware of it, counsel to the Claimants, Ime Nya Asanga (Esq), said that a certified true copy of the judgment and a certificate of the judgment with Form 35 endorsed thereon, had been served vide DHL courier her (Maureen) and that the proof of service indicates that she personally signed for them at 09:20 am of Thursday, 18th February, 2021

Barrister Asanga further explained that Ogun State High Court Form 35 titled NOTICE OF CONSEQUENCE OF DISOBEDIENCE TO ORDER OF COURT is an endorsement by the Registrar on the Certificate of Judgment, warning that unless the judgment debtor obeys the directions contained therein, he/she will be guilty of contempt of court and will be liable to be committed to prison.

He warned that if, after 18th February 2021, the Defendant should make any other broadcast defamatory of the Claimants or any one of them, contempt proceedings, which are criminal in nature, will immediately be commenced against her.

It is expected that now that a judicial pronouncement has been made on her broadcasts as they affect MFM and Dr. Olukoya, the defendant would seek wise guidance or counsel herself to safety having now realised that social media grandstanding is a far cry from legal responsibility and justification of words spoken or published.

The following are some of Maureen’s lies/faksehood against Dr. Olukoya, his family and the MFM church…

In the above link, she falsely alleged as follow:

1. That Dr Daniel Olukoya defrauded the US government by selling his books in the US without paying the due tax on the books (see the video particularly from 2:47:10)

2. She and her caller lied that Elijah Toluwani Olukoya (Dr Olukoya’s son) has a whopping sum of N6 billion in Heritage Bank in Nigeria

3. She continued in her many lies that a particular pastor from MFM UK paid the sum of £150,000 into the personal account of Dr Daniel Olukoya and then went to Nigeria to meet the GO so he could help him cover up his fraud.

4. She equally lied that Dr Daniel Olukoya as well as all the MFM UK Trustees are thieves because they are all deeply involved and participated in the alleged fraud that is being investigated by the Charity Commission.

5. She also lied that a particular sum of £4 million was stolen in MFM and this is also known to Dr Olukoya who she alleged that he is fully involved in all the frauds being perpetrated by MFM Church.

6. She and one of her callers lied that Dr Daniel Olukoya evicted a particular lady from an apartment he rented for her because the said lady refused the sexual advances of the Man of God

In the above link, she further alleged falsely as follow:

7. That Mrs Shade Olukoya (Dr Olukoya’s wife) is on the church payroll and she is earning salary in the sum of £35,000 from MFM. Although as a pastor, she is entitled to a salary but she has never taken a penny from MFM UK. (see the video particularly from 1:35:15)

8. That Dr Daniel Olukoya has abandoned his family members, refusing to take care of them. Meanwhile, members of Dr Olukoya’s family from both sides are all still alive to bear witness to the contrary. (see video particularly from 1:57:30)

In the above link, she further alleged falsely as follow:

9. She also lied that Dr Olukoya as the General Overseer of MFM covered up the alleged sexual infidelity of one pastor Dupeola Ajayi whereas the GO, upon receiving the allegation, immediately summoned the pastor to Lagos Nigeria and made him to face series of disciplinary measures which were not limited to immediate recall, immediate suspension from ministering, Deliverance at the Prayer City for two months, rehabilitation program under the supervision of one of the Assistants General Overseer, Pastor Ladejola. Ye said pastor decided to resign instead of submitting himself fully to all these disciplinary and rehabilitation measures.

In the above link, she continued her false allegations as follow:

10. That one of MFM pastor in Austria was also involved in financial recklessness. Whereas, the said allegation was duly investigated by the Police and the alleged pastor given a certificate of clean bill (see the video particularly from 57th Minute)

11. She lied that MFM Pastors are falsifying documents to stay in the UK by ‘arrangee’ (fake) marriage and that the Dr Olukoya knows about these without doing anything to correct it. (see the video particularly from 1:12:50)