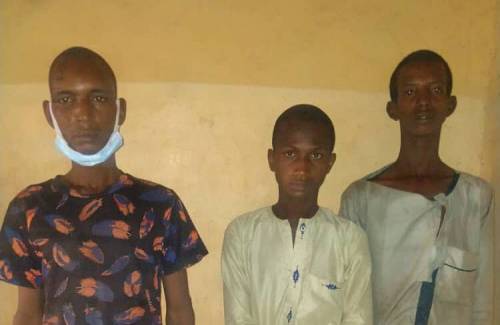 Policemen in Ogun have arrested three Fulani herdsmen for burning several houses in the state.

According to the police, a gun and “a bloodstained cutlass” was recovered from the herdsmen after they were arrested on Saturday.

The herdsmen are identified as Musa Yusuf, Usman Mohammed, and Aliyu Abubakar.

SaharaReporters learnt that they inflicted a deep matchet cut on a resident identified as Ismaila Alabi.

He said, “Three herdsmen were arrested by operatives of Ogun State command for the role they played in the attack on Bamajo village in the Ayetoro area of the state. In the early hours of the day, the men attacked the village where they set some houses ablaze and inflicted a deep matchet cut injury on one Ismaila Alabi.

“On receiving the report, the Area Commander mobilised his men, hunters, and youths to the scene where the entire area was thoroughly combed. The combing exercise was extended to Igboaje bush where one Musa Yusuf was apprehended with a gun and a bloodstained cutlass.

“His arrest led to the arrest of two others namely: Usman Mohammed and Aliyu Abubakar, who are strongly believed to be part of those who launched the violent attack.

“The injured victim was quickly rushed to a general hospital for treatment.

Meanwhile, the Commissioner of Police has ordered the immediate transfer of the suspects to the state Criminal Investigation and Intelligence Department for further investigation.

“He also directed a massive manhunt for the rest of the arsonists with a view to bringing them to justice.”

Yewa communities have been troubled in recent weeks by Fulani herdsmen and reprisals also by residents leading to ethnic clashes in the area.

They were also in Ibadan, Oyo State last week to visit the area where violence raged between herdsmen and residents, leading to the destruction of lives and property.

In Oyo, Governor Bagudu, who lamented the sad incident between the two groups, however, promised that the northern governors would give necessary support to restore normalcy and redeem the lost property.