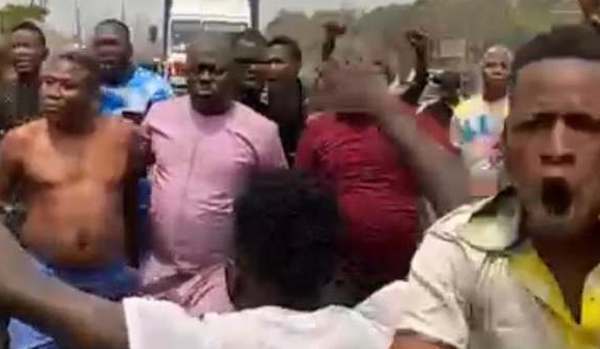 The Department of State Services, DSS, has broken the silence on purported attempt to arrest Yoruba activist, Sunday Ighoho on Lagos-Ibadan Expressway.

The DSS, in a statement said it never attempted to arrest Igboho at any time, saying the report was fake.

A statement issued by Peter Afunanya, Public Relations Officer, Department of State Services refuted the claim and called on the public to disregard the report and take it as misinformation.

“The Department of State Services wishes to refute the news that it attempted to arrest one Sunday Igboho, today, at Ibadan, Oyo State.

“The said news is misinforming and should taken as fake and therefore be disregarded,” DSS said.

Reports on Friday said violent attempt by a joint team of soldiers, DSS and policemen to arrest Igboho was foiled.

Critic, Femi Fani-Kayode confirmed that the joint security team sought to violently arrest Igboho while on his way to Lagos to see Pa Adebanjo.

According to him, he just spoke with Igboho who confirmed that there was a violent attempt to arrest him by a joint team of soldiers, DSS and the police.

Fani-Kayode condemned the attempted arrest of Igboho, saying it would be very dangerous to do so, adding that if the security operatives wanted to see him, all they needed to do was to simply invite him and not to lay ambush for him.

“I condemn this attempt to ambush and abduct him. It is not only reckless but also very dangerous.