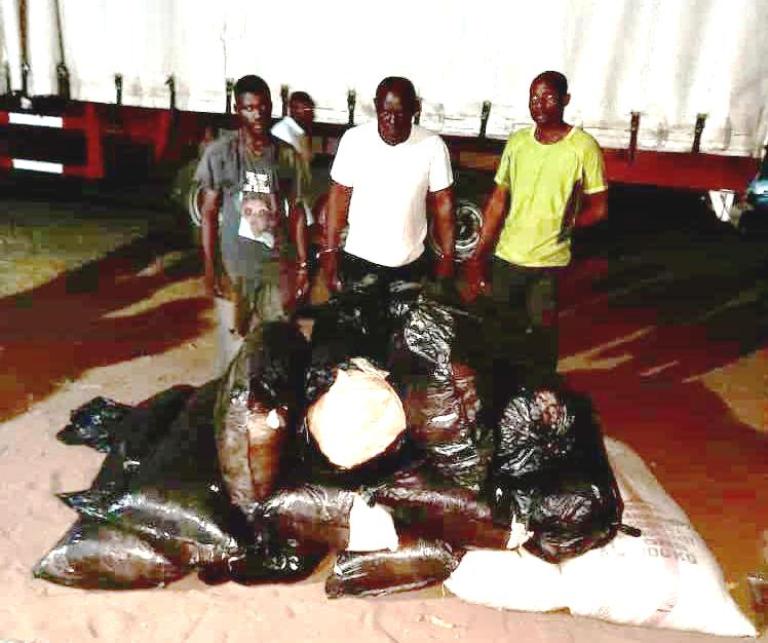 Three suspects arrested alongside the seized truck are the driver, Okeke Linus; the conductor, Bokwagh Tivfa, and the courier, Chidi Ofondu.

A statement by Femi Babafemi, NDLEA director of Media and publicity, read:

“On the 24th February 2021, at about 19.30hours, based on information, Imo State Command intercepted a 40ft Fonton truck with registration number Lagos KJA 991 XZ, belonging to AG Leventis, Aba, a transporter for Nigerian Breweries, suspected of conveying some quantities of cannabis sativa at the control bus stop, Owerri, Imo State.

“The truck, which had empty bottles in crates belonging to Nigerian Breweries, was taken to the command headquarters, Owerri for a thorough search.

“In the process, 13 big bags of dried weed suspected to be cannabis Sativa and weighing 239kgs concealed in between the crates of empty bottles were recovered.

“The truck was coming from Idiroko where they had gone to deliver products and thereafter carried empty bottles back to Aba.

“They stopped at Okada, Edo State on the 23rd February 2021 where they slept over, and it was in Okada they met the courier, Chidi Ofondu, where a total of 26 bags of the suspected substance were loaded.

“The trio left Okada in the morning of 24th February 2021 to Aba en route Owerri.

“Thirteen (13) bags of the exhibit were dropped along the road in Imo state before they got to the control bus stop, Owerri same day where they were intercepted.”