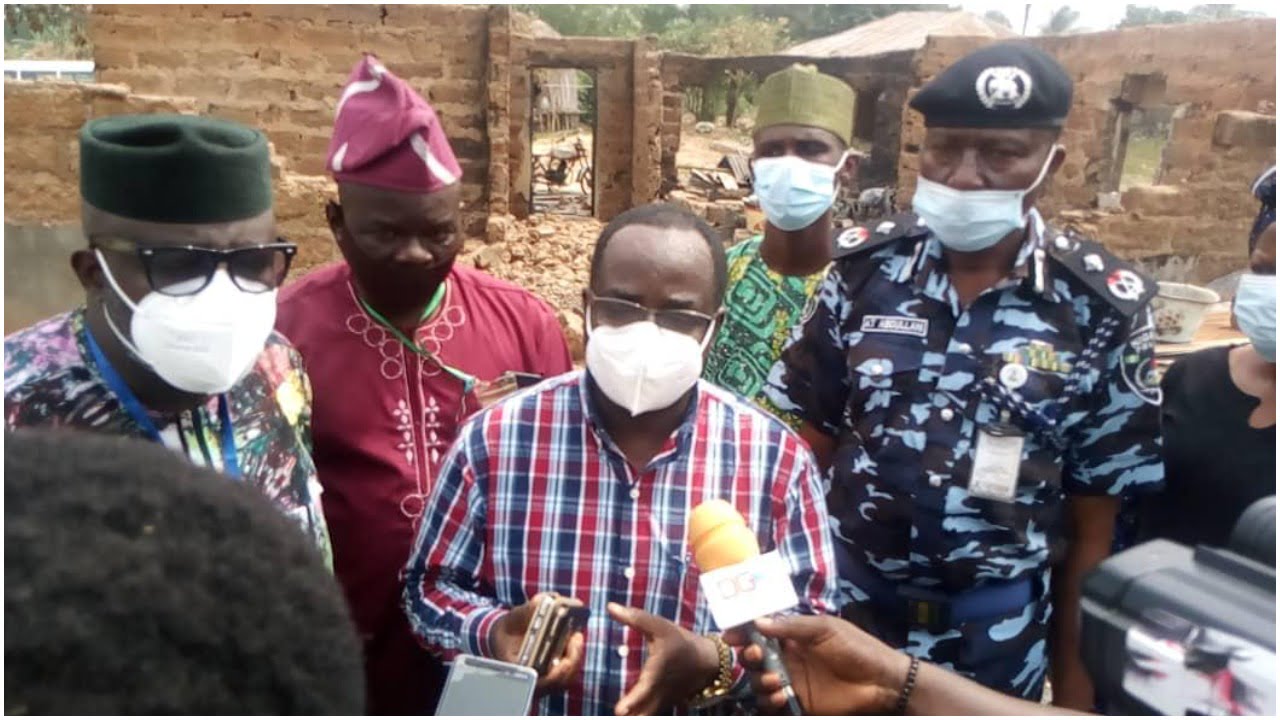 The former House of Representatives member issued the warning during an on-the-spot assessment of some of the areas affected during the recent herders attack in Yewa North LGA of Ogun State.

Oladele who was accompanied by the State Commissioner for Budget and Planing/Chairman of Palliatives Sub-Committee, Mr. Laolu Olabimtan, Deputy Commissioner of Police, Operations, Mr. Abdullahi, Committee Secretary Mr. Mudashiru, Yewa North Local Government Chairman, Mr. Bankole, other top government officials and security operatives, told the people that his committee which was set up by Governor Dapo Abiodun has resolved to leave no stone unturned in the course of restoring safety to all Yewa communities.

“We are happy to know that you have remained as peaceful people who refused to take the laws into your hands even in the face of threat to life.

“I’m assuring you that the government of Ogun State is conscientiously working out modalities that will prevent future invasion of the land by marauders”.

When asked whether the farmers are free to return to their individual farms, Hon Oladele pleaded that the people should hold on for a while until government would beefs up maximum security around the porous borderlines to avoid recurrence.

“The truth of the matter is that all the victims joyfully accepted the palliatives, infact they were appreciative of Governor Dapo Abiodun”.

“To be candid, when I contacted the Chairman of YNLG, Hon Bankole about a farmer that was killed last week, I was told his people have relocated to their homeland which is Republic of Bénin.

“So, that Yewa people have fled to the Republic of Bénin, absolutely, it is not true.

The original settlers, Ketus, who are also Yewas, are still there. What they don’t do is that, they don’t go to farm for fear of herders attack.

“Even yesterday when I went for assessment, they asked me, can we go back to farm?

“I said don’t go now. We are working on this matter.

“Be together at home. When you go to your individual farm or village at this time, you are more susceptible. And we don’t want to record more casualties”

Explaining further, Oladele clarified that “those who don’t have an alternative are the ones we’re working to reintegrate.

“Those, who have alternative, that have fled to where they believe is their ancestral place are free to remain there.

“But for those who don’t have anywhere to go other than Nigeria, it’s the responsibility of the Nigerian government to take care of them.

“If after we have returned peace and security to the affected areas, whoever wants to return to Nigeria is welcome, but I will not go to the Republic of Bénin to plead that they should come back.

“The responsibility of Nigeria government doesn’t go beyond the shores of Nigeria.

“We wouldn’t ask them to come back since Benin government has accepted them as his people who have returned home.

“But if they decide to come back to Nigeria, it’s our duty to provide security and other necessary things for them”, Oladele stated.