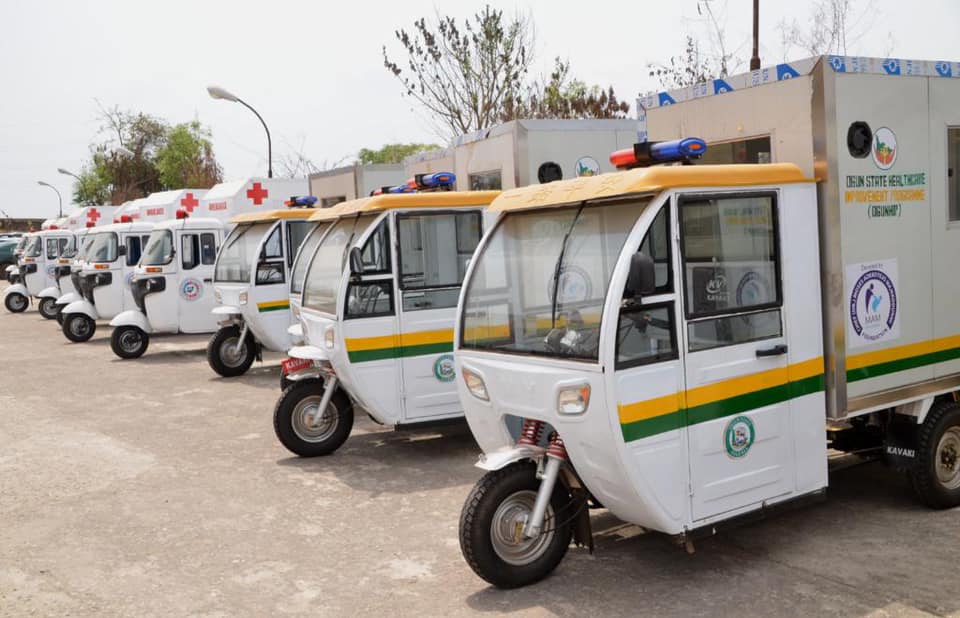 As part of efforts to improve the health indices of citizens as well as put an end to maternal deaths and other health emergencies, the Ogun Government has distributed 22 Tricycle to Primary Health Centres across the State.

Commissioner for Health, Dr. Tomi Coker at the distribution ceremony held at the Obas Complex, Oke Mosan, noted that the government identified that 70% of women who died during childbirth was as a result of lack of access to intervention which usually arises due to lack of transportation and access from PHCs to general hospitals, saying the introduction of the Tricycle Ambulances would put an end to future occurrences.

“We noticed in our mortality review that 70% of deaths that happened among our pregnant women happened because of lack of transportation from PHC to the general hospital when complications occur during childbirth.

To address these issues, His Excellency, Prince Dapo Abiodun took the innovative ideas of introducing Tricycle Ambulance to PHCs particularly in the rural areas where there is difficulty in road access.” She said.

Also speaking, Commissioner for Budget and Planning, Mr Olaolu Olabimtan who noted that health was one of the three thematic areas of the Sustainable Development Goals (SDG), said that the distribution of the ambulances was facilitated principally by the state government with the support of development partners in the health sector through the office of the Senior Special Assistant to the President on SDG to address the issue of access to secondary health intervention, emphasising that it was the best possible solution to medical health emergencies, especially in the rural areas.

In his remark, Commissioner for Local Government and Chieftaincy Affairs, Hon. Afolabi Afuwape who said that the introduction of the Tricycle Ambulance was a good step in the right direction which would help tackle the issue of access to secondary and tertiary health intervention due to the terrain of the rural areas, enjoined health workers to use the ambulances for the purpose to which they were provided.

On his part, Commissioner for Finance and Chief Economic Adviser to the State Government, Mr. Dapo Okubadejo who emphasised that the event was to complement the efforts of the present administration aimed at providing qualitative health for all in the state appreciated Development Partners, Office of the Senior Special Assistant to the President on SDG, Eco Bank, Nigeria and the Majekodunmi Foundation for their support, urging others to join hands with the State Government in improving PHC service delivery.