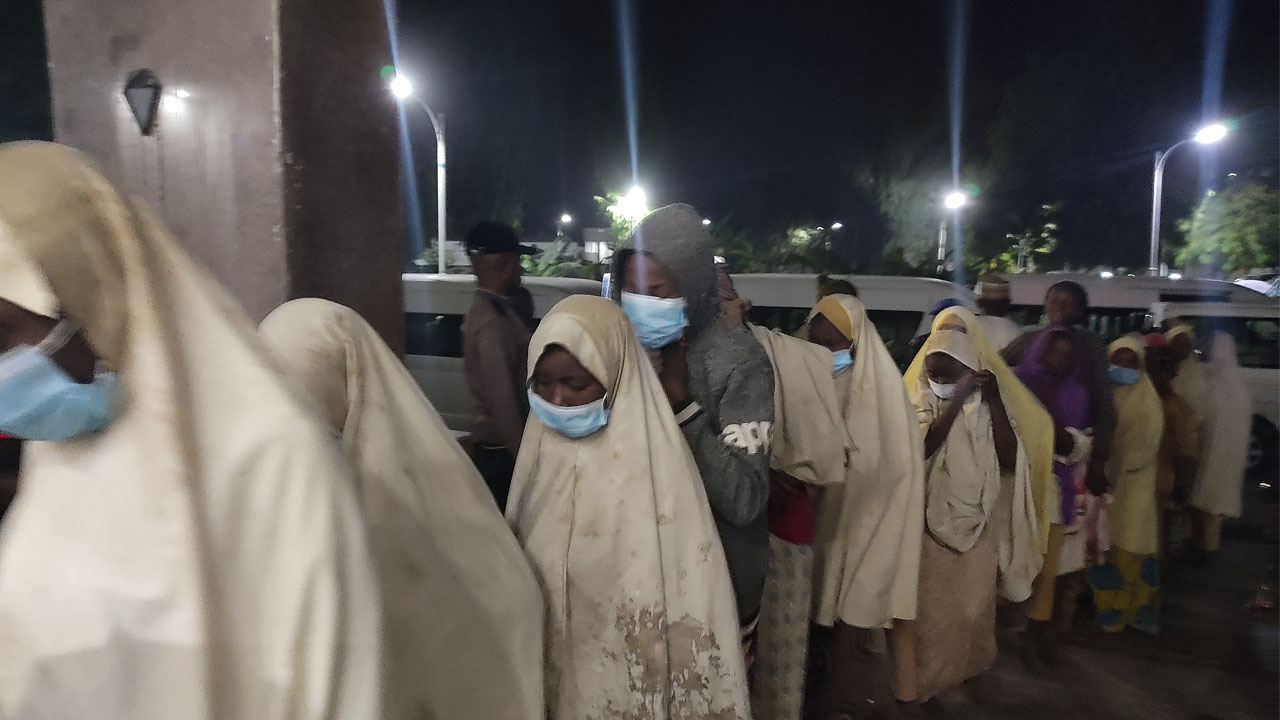 Over two hundred girls kidnapped from their school in Jangebe, Zamfara State, last week have been freed by their abductors.

“Alhamdulillah! It gladdens my heart to announce the release of the abducted students of GGSS Jangebe from captivity,” Matawalle said in a post on Twitter on Tuesday morning.

“This follows the scaling of several hurdles laid against our efforts. I enjoin all well-meaning Nigerians to rejoice with us as our daughters are now safe.”

State officials initially said 317 girls were kidnapped but the governor said on Tuesday that the actual number was 279.

“They have just arrived in the government house and are in good health,” Matawalle said.

Pictures shared by the governor on his Twitter handle show several white buses, one of which has Local Government Service Commission written on it, with the girls inside.

Government officials had been in talks with the kidnappers, known locally as bandits.

A source said “repentant bandits” had been contacted to reach out to their former comrades as part of efforts to free the students.

Heavily armed criminal gangs in northwest and central Nigeria have stepped up attacks in recent years, kidnapping for ransom, raping and pillaging.

The Nigerian military deployed to the area in 2016 and a peace deal with bandits was signed in 2019 but attacks have continued.

In December, more than 300 boys were kidnapped from a school in Kankara, in President Muhammadu Buhari’s home state of Katsina, while he was visiting the region.

The boys were later released but the incident triggered outrage and memories of the kidnappings of 276 schoolgirls by jihadists in Chibok.

Many of those girls are still missing.

The gangs are largely driven by financial motives and have no known ideological leanings.

But there are concerns they are being infiltrated by armed Islamists. The jihadists’ decade-old conflict has killed more than 30,000 people and spread into neighbouring Niger, Chad and Cameroon.

Authorities have denied paying any ransom to secure the recent releases, although analysts say this is unlikely and security experts fear that this will lead to an increase in kidnappings in these regions plagued by extreme poverty.

President Buhari, who has been criticised for failing to deal with the unrest, had insisted that he would “not succumb to blackmail by bandits”.

Kidnapping for ransom in Africa’s most populous country is already a widespread national problem, with businessmen, officials and ordinary citizens snatched from the streets.

At least $11 million was paid to kidnappers between January 2016 and March 2020, according to SB Morgen, a Lagos-based geopolitical research consultancy.

The student abductions have increased the number of children who cannot attend school, especially girls.

The regions involved account for the greatest number of unschooled children in the world, the Brussels-based International Crisis Group says.