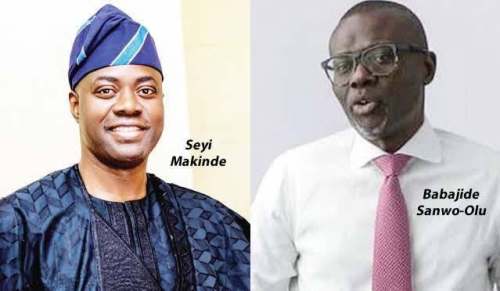 Governor Seyi Makinde of Oyo State and his counterpart, Babajide Sanwo-Olu of Lagos State have become a topic of discussion on social media.

Netizens on Wednesday (today) took to Twitter to make a comparison of the achievements by two Southwest governors who both assume office in 2019.

The fans of Makinde who is of the Peoples Democratic Party was lauded on the bird app for commissioning a series of projects at both state and local level in Oyo. While Sanwo-Olu of the All Progressive Congress on the other hand was challenged to show off his accomplishment in the last two years in office.

According to some of the netizens, Sanwo-Olu’s only achievement in office since 2019 is becoming COVID-19 governor of the year.

“Seyi Makinde is currently working and in the next 1 year, Oyo will be on a commissioning spree like Rivers State is now. Sanwoolu should show us what he is doing in Lagos. Please never insult Seyi Makinde by comparing him to Sanwoolu,” said the handler of a Twitter account with username [@PDP_2023].

On his part, a Twitter user identified with the username [@FASTnFIERCE] condemned those comparing Makinde with Sanwo-Olu who pockets monthly IGR of N30billion.

He tweeted: “Seyi Makinde Vs Sanwo-Olu challenge been popping on my TL

Appreciating the trending challenge, one Chief Inno [@chief_inno] said it will make sense if every state can back up the talk of their achievements with receipts of what they delivered to the people who voted them into office.
He wrote: “I like how receipts are flying to support Seyi Makinde’s initiatives in Oyo State. If every state can backup the talk with receipts of what they have delivered.
It’s beyond photo ops and commissioning, it’s real evidence of completed works.”

Makinde and Sanwo-Olu had both faced trolls in recent over issues of threats on citizens by bandits, security agencies respectively.