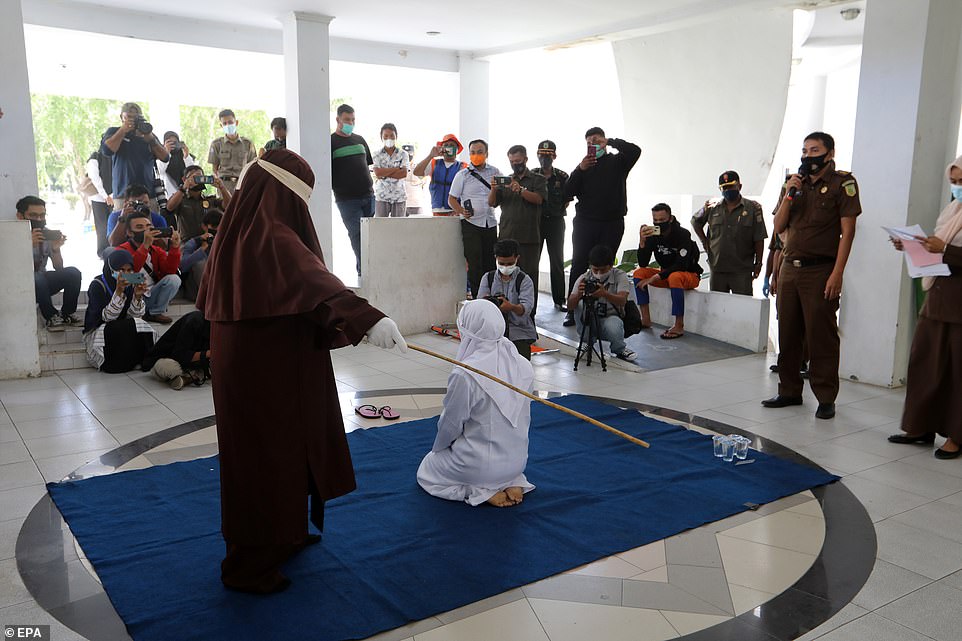 The men and women were publicly flogged in the ultra-conservative Aceh province governed by Sharia law on Monday.

No less than four couples have been publicly embarrassed and caned with up to 20 lashes for having sex outside of marriage in Indonesia.

The men and women were publicly flogged in the ultra-conservative Aceh province governed by Sharia law on Monday.

Crowds gathered to watch the brutal punishment being handed out despite the coronavirus pandemic, with many taking pictures and videos on their phones.

The couples, wearing face masks, were checked by medical officers before the caning and escorted in handcuffs to the rug where they knelt to receive the lashings.

A hooded cane-wielding enforcer, whose face could not be seen, delivered the punishment to the offenders.

Aceh is the only province in the world’s most populous Muslim-majority country that imposes Islamic law. About 98 per cent of Aceh’s five million residents are Muslims.

The public canings usually attract large crowds of eager spectators but today’s punishments were handed out indoors with only a small circle of observers.

Officials said earlier this year that the floggings had been moved indoors and shorn of the usual opening speeches because of the virus pandemic.

Aceh adopted Sharia after it was granted special autonomy in 2001, an attempt by the central government to quell a long-running separatist insurgency.

Human rights groups have slammed public caning as cruel, and Indonesia’s President Joko Widodo has called for it to end.

But it has strong support among Aceh’s population.