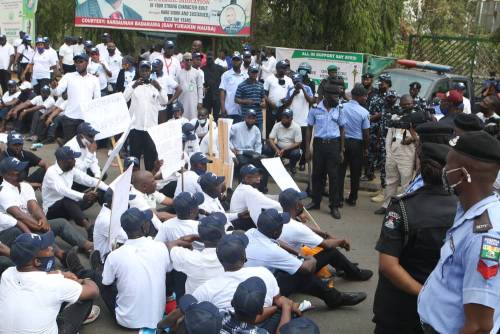 The group also expressed dismay at the action of the Nigerian Governors Forum (NGF) aimed at frustrating the implementation of financial autonomy.

It was pure drama that took over the National Assembly on Tuesday when workers from the various state Houses of Assembly under the auspices of the Parliamentary Staff Association of Nigeria (PASAN) stormed the National Assembly Complex in Abuja and drove away security operatives attached to the building to demand full implementation of financial autonomy for the state legislature.

The group also expressed dismay at the action of the Nigerian Governors Forum (NGF) aimed at frustrating the implementation of financial autonomy.

It was gathered that the protesters caught the security operatives on duty unawares when they arrived at the building’s main gate while chanting anti-government slogans.

The policemen and security personnel at the entrance were said to have earlier prevented the mob from gaining access when they were told that a representative of the Senate President and Speaker was on his way to address them.

Sensing that the promise would not be fulfilled, the mob forced their way in and drove away all the security operatives after waiting for hours.

The protesters were said to have run out of patience and resolved to put an end to condoning further delays in the implementation of the financial autonomy for state Houses of Assembly.

Commenting on the development, the group’s Zonal Vice President, South-West, Adu-Peters Olusegun, said the protesters were at the National Assembly to seek the audience with the leadership on the need to speed up the implementation of the law.

He said: “We are talking of order 10 passed and signed by the President of Federal Republic of Nigeria wherein among other things, the independence of the legislative in terms of financial autonomy where the houses of Assembly will not go cap in hands to the governors to seek for financial favour or curry favour for that matter.

“The fulcrum of democracy is legislative and for it to stand, we must be able to defend it.”

The protesters blocked the second gate preventing human and vehicular movement in and out of the building.

They also vowed to remain at the second gate until the Senate President, Ahmed Lawan and Speaker of the House of Representatives, Femi Gbajabiamila came out to address them.