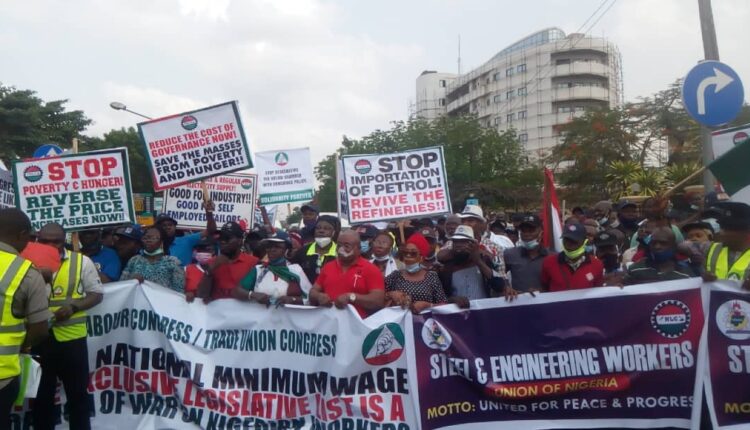 Workers under the aegis of the Nigerian Labour Congress and Trade Union Congress on Wednesday protested against plans to remove minimum wage from exclusive list.

The proteating workers took their agitations to the Office of the Lagos State Governor, Babajide Sanwo-Olu.

They blocked the entrance to the governor’s office, halting activities at the seat of power in Lagos.

Due to the demonstration, there is gridlock around Alausa Secretariat, Ikeja, Allen Junction, Ogba, and Agindingbi among others.

Recall that a bill seeking to remove the negotiation on minimum wage from the exclusive list to the concurrent list passed the second reading in the House of Representatives on February 23.

According to the sponsor, Garba Mohammed (APC Kano), the bill is to allow both the federal and state governments to freely negotiate minimum wage “with their workers in line with our federalism.”

But the NLC opposed the plan, describing the bill as an attempt to undermine Nigeria’s working class.