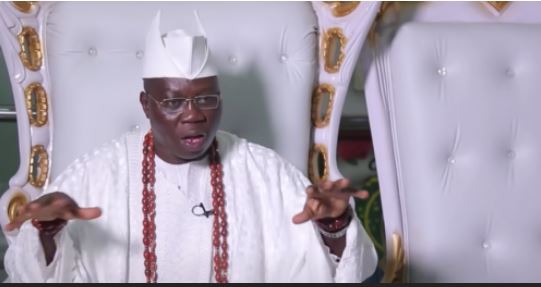 He also said that Wakili was just pretending as he was seen about two weeks ago in Kara market in Ogun State buying grass for his cattle.

Iba Gani Adams, the Aare Ona Kakanfo of Yorubaland, has refuted the claim that suspected notorious Fulani leader Iskilu Wakili, arrested on Sunday by members of the Odua People’s Congress in Ibarapaland, Oyo State, is in poor health and blind, according to a report by SaharaReporters.

Adams revealed this in an interview with Reuben Abati on Wednesday, adding that the Nigeria Police were not serious with the security of the country.

“Wakili is not blind. We can see his pictures in the national daily today. He is just pretending. He came to Kara market in Ogun state with a bag full of money to buy cow feed two weeks ago.

“Unknown to him, we have been monitoring his movement for long. Anyone saying Wakili is blind is misinformed. He is a criminal. All what you saw him doing when he was arrested was just like acting drama. When they arrested him, he trekked by himself from his house to the vehicle without any form of assistance.

“Those boys who arrested him did not put him on a motorcycle so that the villagers who were angry with him would not lynch him, so they kept him inside the vehicle so as to give him protection. The police took sides with him in the drama by taking him to the hospital for medical attention. Nothing happened to him because our boys did not manhandle him.

“Even if anything happens to him in the course of the operation, it is justified because he is a criminal who has done more evil to innocent people in that area. The king and leaders of Ibarapa perceived Wakili as a spirit that could not be arrested. They referred to him as ‘Anjonu’ (someone with mystical powers).

“They perceived him as someone who could to change to a cat, snake or any other thing. But when it comes to OPC, unless we don’t want to act. We did our research before our operation. We did all the needful before we got to that venue. If it will take us three months to do our research on someone to get him, we will do it.

“We don’t rush to do our operation. That is OPC and that was the kind of training I gave to them. We will research you to know your source of power and protection. We will be ahead of you in the spiritual realm and we will get you. That is how OPC operates.”

Reacting to the arrest of the OPC operatives that were detained and freed by the Police, Adams condemned the act, saying Nigerians had now lost confidence in the security agents, even after their failed attempts to arrest Wakili.

“It is unfortunate that the Nigeria police acted like that. What they did has made us regret our action in supporting and defending them when hoodlums hijacked #EndSARS protest in October 2020. It was public knowledge that Wakili had become a terror to residents of that axis in the past three years.

“It was also public knowledge that his village has become a no-go area for anyone who is not part of his gang. The police and other security agents were unable to arrest Wakili or anyone in his community no matter the crimes they committed. The information at our disposal is that Wakili has carried out over 100 kidnaps in Igangan, Aiyete, Tapa, and Igbo-Ora.

“He was the godfather to the kidnappers operating in this axis. The Operation Burst in Oyo state, which is a combination of military men and police made two attempts to arrest him but they couldn’t. For each attempt, they came with nothing less than 15 vehicles to that area.

He also spoke about the efforts invested by the OPC to get Wakili arrested, and the body language of the Nigeria Police showing that they were insincere about fighting insecurity.

“If the Nigeria Police is sincere about the security of our country and our safety and if indeed, they are the mother of security as they say it in their circle, and if they want us to have confidence in them again, they have to celebrate these gallant OPC men who arrested and handed him over to them instead of arresting them for carrying out a noble cause.

“They claimed that one person died during the operation. If you go to the den of a kidnapper to arrest people, anything can happen in the process. The information the boys who arrested gave us was that Wakili had armed over 150 boys with guns, bows and arrow.

“They climbed on trees and hid there. When our boys got to the location, they rained bullets on them. When our boys pressed on and Wakili’s boys saw the level of confrontation, they now shouted ‘Wayo Allah’ and they moved within the cows and used them as cover to escape to neighbouring Benin Republic. The cows they have there was more than 1,500.

“Now we realised that the information Oyo state governor, Seyi Makinde gave that criminals have infiltrated neighbouring borders is true. In less than 30 minutes, you can trek to the Benin Republic from where Wakili is living. The village Wakili is living is about three hours to Igangan if you drive a Hilux vehicle. Our boys moved by 1 am and got there by 4:15 am.

“Before they were able to arrest Wakili, it was about 6:30 am- 7 am. After realising he could not withstand our boys, he tried to flee but they arrested him. So, there is no way you can do such an operation without a casualty or collateral damage. These are criminals who will do everything possible to resist arrest.

“So, for the police to now turn those who arrested these criminals to the accused, definitely, it shows that the Nigeria Police are not interested in the safety of Nigerians. It is a shame on them for doing that. Despite the physical attacks on our boys, they ensured that Wakili did not die in the operation but they brought him alive and handed him over to the police. They deserve commendations and not the humiliation the police are subjecting them to.”