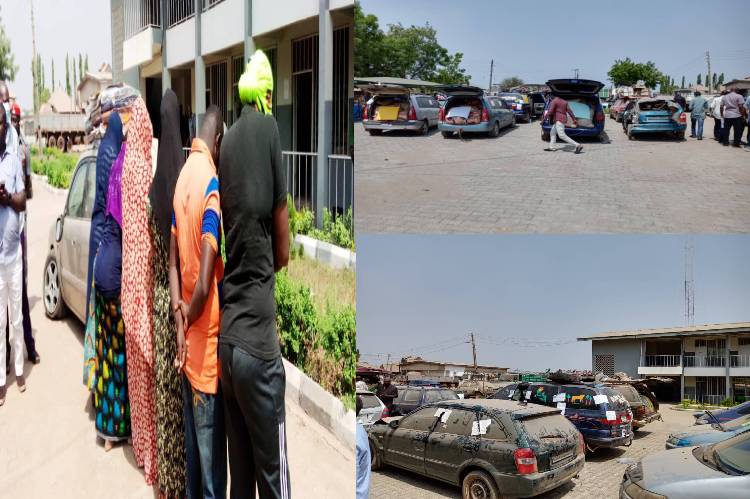 The operation was carried out by the Joint Border Patrol Team of the NCS, North-Central Sector 3, with the service explaining that the foreigners belonged to a syndicate that specialised in stealing women wrappers and duping Nigerians with charms.

According to a report by The PUNCH, the Nigeria Customs Service, on Wednesday, paraded five illegal female immigrants in Ilorin, Kwara State, for allegedly stealing bails of cloths and other sundry offences.

The operation was carried out by the Joint Border Patrol Team of the NCS, North-Central Sector 3, with the service explaining that the foreigners belonged to a syndicate that specialised in stealing women wrappers and duping Nigerians with charms.

The service also paraded a Nigerian, who allegedly served as the driver of the foreigners.

Parading the suspects at the NCS headquarters in Ilorin, the Coordinator of the JBPT, Comptroller Olugboyega Peters, said Fatima Mohammadu (38) from Niger Republic, Judith Kofi (29) from Ghana, Fanta Camara (30) from Mali, Fadima Taore (37) from Chad, and Fatimata Camara (39) from Benin Republic were intercepted in Kogi State.

Peters revealed that the team had from January till date arrested three sets of human traffickers with 80 children and handed over them to the Nigeria Immigration Service and the National Agency for the Prohibition of Trafficking in Persons.

He said, “The JBPT, while conducting a stop-and-search along the Lokoja-Abuja Highway, on February 21, 2021, around noon, intercepted one Mazda 626 with number plate ABJ 187 BF, conveying five women from Zuba Abuja to Lokoja in Kogi State. On searching the vehicle, 15 bundles and 18 pieces of wrappers were found to be concealed in the bonnet and other compartments of the vehicle.

“Preliminary investigation revealed that the five women were from different countries of Chad, Ghana, Mali and Niger Republic. They were found to be illegal immigrants without any means of identification.

“Investigation further revealed that they operate as a syndicate comprising of two groups that specialises in duping and stealing of women wrappers and most times use charms to perpetrate their crimes. One of the groups operates in Kaduna and the other in Kano axis, prominently in big shops selling women wrapper as their targets. The groups came into the country through Katsina and Seme illegal routes.

“The driver of the Mazda 626, Mufutau Woye (34), is a Nigerian from Kwara State, but resides in Kubwa FCT Abuja as a commercial driver. He was only hired to convey them.

“Fatima Mohammadu (Nigerien) is the leader of the group. She invited and harboured Fadima Taore in the country. A Nigerian, Aisha by name resident in Kano, met Fatima Mohammadu and Judith Kofi in Libya and brought them into Nigeria. Fatimata Camara and Fanta Camara were brought into the country by their Nigerian Boyfriends’ from Benin Republic but were later abandoned in Nigeria

“Fatima Mohammadu and Fatimata Camara confessed to stealing 15 bundles of the wrappers worth N255, 000 in Kogi state.”