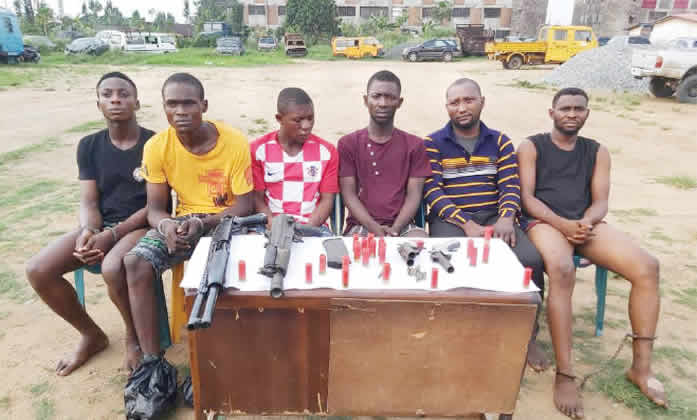 A seven member gang that allegedly specialises in robbery and kidnapping in Abia State have narrated how they formed the robbery gang during the #EndSARS protest.

According to PUNCH report, the gang murdered two point of sale operators, Ezinne Iroh and Dr Victor Chimaobi. Iroh was reportedly killed on January 31, 2021 after robbing her of N150,000 while Chimaobi was murdered on January 21.

The robbery gang also killed one of their kidnap victims, Achinulo Ignatius, after collecting N2.5m ransom from his relatives. The 59-year-old man was reportedly abducted on November 1, 2020, at the Osisioma junction, along Enugu-Port Harcourt Expressway.

Rafael, one of the gang member, after his arrest was said to have led the police detectives to the arrest of six other members of the gang.

The 32-old indigene of Kogi State, stated that his gang was formed during the #EndSARS protest to cash in on the relaxed police patrols at the time.

The father of two said he was formerly with a robbery gang led by one Handerson, who is a member of Vikings Confraternity, to which he also belongs.

He said, “I was arrested in connection with armed robbery and murder. Henderson always had money on him and whenever I was broke, I went to him for support. On one occasion, he asked me to join his gang and I accepted. In the first operation I went with him in August 2020, he was arrested and I escaped to Imo State. I learnt he is still in prison.

“When the #EndSARS protest started, I returned to Aba and teamed up with Henderson’s other men to form a new gang. We robbed a PoS operator at a bank close Umugasi area in Aba and collected N52,000 from him. We also went away with the PoS machine. We were three that went for that operation and we used a tricycle and locally-made guns. I got N20,000 as my share.”