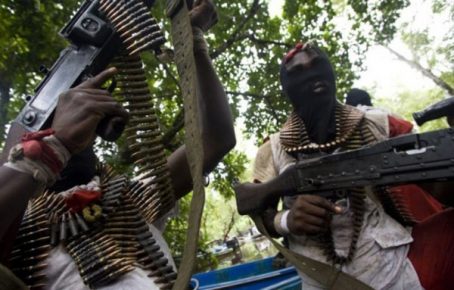 Some persons suspected to be kidnappers have again launched an ambush on travellers in Ekiti State, killing one person while the whereabouts of others remain unknown as at press time.

The incident was about the seventh in recent times in the state, with casualties recorded in most cases.

It was learnt that victims of the latest attack were ambushed on Saturday evening, at a location between Ikere Ekiti, the headquarters of Ikere Local Government Area of Ekiti State and Iju, a boundary town in Ondo State.

The victims were said to have been waylaid after the hoodlums suddenly came from the bush to stop their vehicles with guns.

It was not clear as of the time of this report if occupants of about three vehicles allegedly involved managed to escape with their passengers.

Confirming the incident to newsmen in Ado Ekiti on Sunday, Spokesman for the Police Command, ASP Sunday Abutu said one person lost his life to the attack.

According to the PPRO the passenger’s Sharon Mini Bus involved was coming from Ondo State and heading to Ekiti when the incident happened.

He said the Command had already launched a “discrete investigation and serious manhunt” to unmask the gunmen.

He disclosed that the driver of the bus managed to escape from the scene with the vehicle and ran to Ilupeju-Ikere Divisional Police Headquarters in Ekiti State to report the incident.

“The driver accounted that he was brave enough to have speedily escaped with his passengers from the scene but in the process, one of the passengers was unfortunately hit by a bullet and was rushed to the General Hospital, Ikere-Ekiti where he later died.

“The Ekiti State Commissioner of Police implores everyone in the State not to panic as the Command shall join forces with Ondo State Police Command to ensure that the perpetrators are made to face the full wrath of the law,” he said.

Abutu called on people of the state with useful information that could lead to the arrest of the gunmen not to hesitate doing so at any nearest police station or contact the phone number – 08062335577.