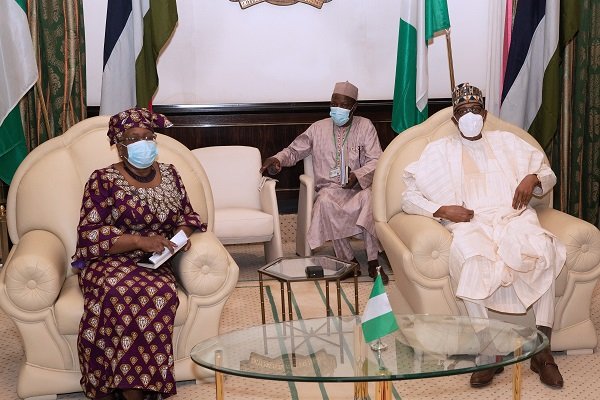 The steps include diversification of the economy, bold economic reforms and pursuit of technological development.

She warned that the country risked economic doom in no distant future, if it failed to immediately embark on diversification from oil to other sources of survival.

Painting a gloomy picture of fossil oil in the future, the former Finance Minister urged speed, stressing that delay could be dangerous.

She stressed: “We need to have a game plan to be able to escape the consequence of a monolithic economy in a fast-changing world.”

She spoke with reporters, shortly after visiting President Muhammadu Buhari to thank him and Nigerians for their roles in her emergence as the head of the WTO.

The former World Bank chief hailed the feat achieved by the Dangote Group.

According to her, Nigeria should tap into renewable energies, since some countries have already set timelines to end the use of vehicles and equipment operated with fossil fuel.

Specifically, Okonjo-Iweala mentioned Norway which will from 2030 no longer have petrol-powered cars plying its roads.

She said: “We have to start transitioning this Nigerian economy into other areas, where we will be able to create jobs and earn foreign exchange.

“As a country, we really have to go into strong reflection; we need to have a period of transition and how we are going to use it. We have to start thinking about how we transition from fossil fuels and I’m really worried about that. We need to have a game plan to get there.,

We also have to start looking at the horizon where many countries are now moving to electric cars and many developed countries where cars are manufactured or not, have said that from 2025, I think Norway said from 2030 and on, they are banning any cars that use petrol. Diesel is already out.

“If we don’t start, we will find ourselves at the end of a couple of decades with no way of being able to make an additional foreign exchange for some of the products we need.”

Although she welcomed the establishment of the Dangote Refinery, the WTO boss said she wished it had come earlier than now.

She added: “Well, it’s the largest refinery, I wish we had done it years ago. If we had done it earlier and encouraged Alhaji Dangote, who is doing a very good thing, it could have been better because right now, we would have been able to have our own oil refined here and not having to import.

“But we are where we are. I think he’ll be able to service other countries on the continent. His cement industry is already in 16 or more. So, yes, we are congratulating him,”

The WTO chief also said the world body was worried about Nigeria’s multiple exchange rate regimes and how they affects trade.

She said some member-states have complained about Nigeria invoking its balance of payment agreement article to be able to conserve foreign exchange.

Mrs. Okonjo-Iweala said: “The WTO has one of the agreements of a balance of payments and Nigeria certainly invoked this to be able to conserve foreign exchange.

READ  Atiku Gets 21-Day Ultimatum To Return To Cameroon, Apologise To Nigerians

“Some members have brought a complaint against us (Nigeria) that we shouldn’t have used its article in that way. The WTO is concerned about foreign exchange, the way we manage it, the way we use it, and how we use it to support manufacturing or imports and exports in our economy.

“I think that we had that discussion with them, they complained about the exchange rate regime, and we (Nigeria) tried to explain. Anyway, I shouldn’t say we because I’m now DG WTO, it is for Nigeria’s representative to explain to the WTO, to those members complaining why we’re doing this.

“We’re also going to see the Governor of the Central Bank of Nigeria (Godwin Emefiele), and we will undoubtedly discuss some of these issues.”

She, however, allayed fears that embracing the free trade policy of the world body would harm Nigeria’s economic diversification drive.

Mrs. Okonjo-Iweala said special and differential treatment could be applied to prevent vulnerable countries from collapsing under completion.

She said that duties could be applied on imports to prevent the country from being a dumping ground.

Mrs. Okonjo-Iweala admitted that despite helping to lift millions out of poverty, free trade has not been beneficial to all, especially women.

On COVID-19, she advised Nigeria to set up local vaccine manufacturing, warning that coronavirus would not be the last pandemic. READ  Benue Killings: Catholic Church Give Details Of The Mass Burial Of Rev Fathers, Others Killed In Church
Share this Post[?]