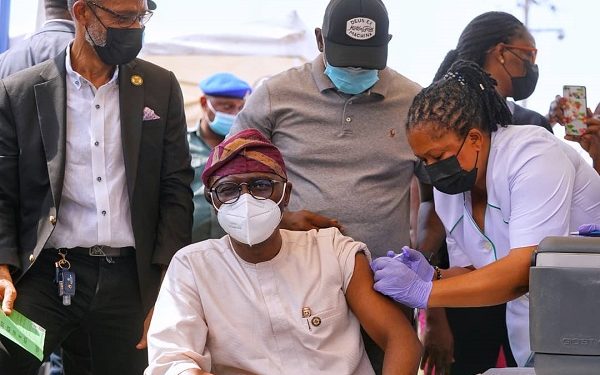 Sanwo-Olu, who addressed reporters at his office on Monday, said he felt no side effects contrary to widespread speculation that the vaccine comes with side effects.

He said: “It has been three days since I got the AstraZeneca vaccine. I can confirm to you that I felt no after-effects. I didn’t have a headache or restlessness.

“I want to tell Lagosians that the speculation of side effects is unfounded. I have taken and Lagos has continued to vaccinate its frontline workers. The vaccine we have has not shown any side effects. There is nothing to worry about. We encourage others to continue to take the vaccine.”

“No symptoms at all, I didn’t feel anything,” the deputy governor said.

Prof. Abayomi, however, felt slight pains at the site of the injection a day after taking the vaccine but was relieved after taking pain relief medicine.

However, Obaseki and Shaibu have received their first jabs of the AstraZeneca COVID-19 vaccine.

They on Monday got inoculated some days after the state received more than 81,080 doses of the vaccine from the Federal Government.

They took the vaccine during the COVID-19 vaccination inauguration ceremony in Benin.

Obaseki gave the assurance of the safety of the vaccine.

Other dignitaries, who were vaccinated were the Senator representing Edo South, Matthew Urhoghide, Sen. Clifford Ordia (Edo Central) and Secretary to Edo State Government, Mr. Osarodion Ogie and others.

Uzodimma alongside his wife Chioma, his deputy, other top government officials and a number of health workers also on Monday received the COVID-19 vaccine.

The governor received his jab during the flag-off at the state Primary Health Centre, Owerri at the weekend.

Other strategic leaders, frontline workers and other persons, who are in constant touch with the public, have also started to benefit from the first phase of the exercise, which an official of government said the state had received 80,720 doses.

The vaccine was administered on the Lalong on Monday at exactly 11:15 a.m. and his wife, Regina.

However, other officials also vaccinated include the state exco members, security chiefs, Christian Association of Nigeria (CAN) Chairman and traditional rulers among others.