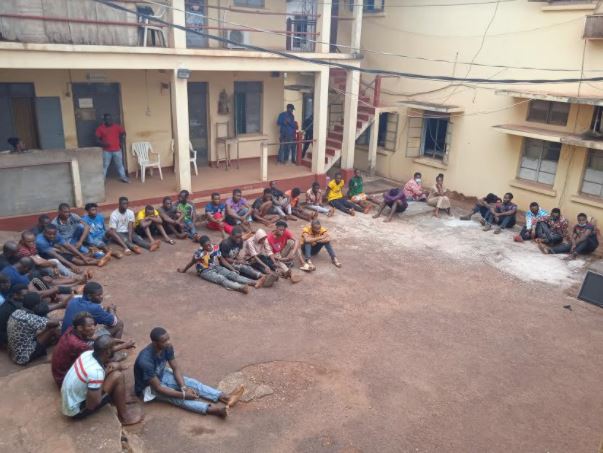 The Enugu State Command of the Nigeria Police Force on Friday, March 19, confirmed the apprehension of at least thirty-eight male and two female suspects for various degree of offences.

The suspects were said to be arrested from different locations across the state for armed robbery, kidnapping, illegal possession of firearms, conspiracy and cultism.

Giving details of the arrest to newsmen when parading the suspects at the Command’s headquarters today, the State Commissioner of Police, Mohammed Aliyu, attributed the achievement recorded to interagency collaboration and information sharing.

Aliyu again assured residents of the state total commitment to flush out criminals out of the state, noting that there would be no hiding place for them under his Command.

He said, “During our last meeting, I told you that we are making conscious efforts to put in place policing strategies that we require to effectively police the state, in view of maintaining public security. It will interest you to know that these strategies have resulted in successes.

“Today, the Command has successfully arrested a total of 38 male and two female suspects for their involvement in the offences of conspiracy, armed robbery, child stealing, unlawful possession of firearms and cultism.

“This was as a result of sustained synergy with sister security agencies, the neighbourhood watch group, security stakeholders and law-abiding citizens of the state.”

Naija News understands that 16 members of Aro Mates and Eiye Confraternity who were engaged in a bloody cult war for the past one week were among the suspects paraded on Friday by the police command.

Giving an account of their arrest, Aliyu said the command nabbed them between March 12 and 14, 2021, through a combined effort of operatives attached to Anti-Cultism Squad, Crack Squad, Anti-Kidnapping Squad and Police Divisions in the Command.

No fewer than 13 persons have been killed and seven others injured in a series of bandits’ attacks on communities in Zangon Kataf, Kauru and Chikun Local Government Areas of Kaduna State.

In a statement on Friday by the state Commissioner of Internal Security and Home Affairs, Samuel Aruwan, 56 houses, 16 motorcycles, and several barns were razed in one of the attacks on Kizachi village of Kauru LGA.