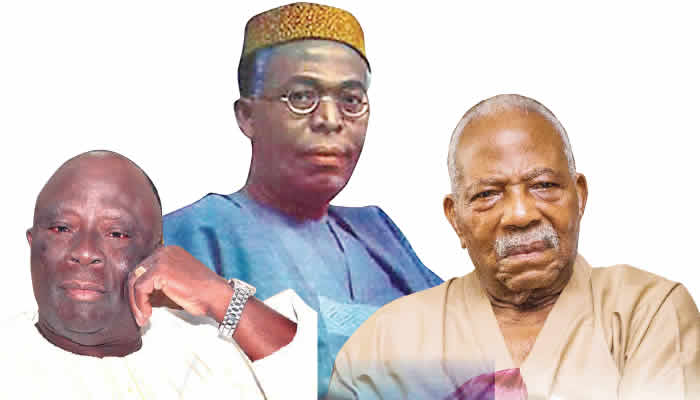 With the emergence of Chief Ayo Adebanjo as the leader of the Yoruba socio-political organisation, Afenifere, JESUSEGUN ALAGBE examines the challenges before the nonagenarian at a time the South-West is bedevilled by rising insecurity, particularly criminal herdsmen attacks

Rising from a meeting after 23 years of its founding, the pan-Yoruba sociopolitical group, Afenifere, on Tuesday named a new national leader – Chief Ayo Adebanjo. Adebanjo, who will turn 93 in April, is taking over leadership from Pa Reuben Fasoranti, 95.

After 13 years in the saddle, Fasoranti said it was only appropriate for him to step down to allow someone more active and who could combat the enormous threats facing the Yoruba people today.

He said, “The group needs, more than ever before, to have an improved organisation with a more effective approach to combat the monstrous invasion of our culture and pride as a people. Only a more alike and active leadership can achieve this. At 95 I am hardly able to provide such and so it is time for me to step aside.

“At this junction, I am proud to announce Chief Ayo Adebanjo, a politician of the Awolowo school of thought, as the acting leader of Afenifere, and His Royal Highness, Oba Oladipo Olaitan, the Alaago of Kajola Ago in Atakumosa East Local Government Area, Osun State, as the deputy leader.”

All of them saw a role model in Chief Obafemi Awolowo, the late first Premier of the Western Region whose most important bequests – styled ‘Awoism’ – were his exemplary integrity, welfarism, and progressive politics.

Afenifere was founded 21 years after Awolowo’s death and Fasoranti had led the group since 2008.

To some observers, Adebanjo’s leadership comes at a time the South-West region is witnessing heavy tension, particularly insecurity induced by the activities of criminal herdsmen, who have been accused of invading and destroying farmlands with their cattle, raping and killing of people in host communities.

The herder-farmer crisis had been a concern for years, but it has assumed inconceivable new dimensions in the South-West, which have resulted in outright killing of farmers, incessant rape of old and young women, and people being displaced from their homes to as far as the Benin Republic.

Therefore, as Fasoranti stated in his parting statement, the seeming invasion of the South-West by criminal herdsmen would feasibly be the focal issue for Adebanjo and his team.

However, to enjoy the support of the Yoruba people to tackle this joint problem, some people believe the new Afenifere leadership must remain apolitical.

“The leadership of Afenifere must be apolitical. They should truly represent the interest of the Yoruba race,” said a former two-time Commissioner for Local Government and Chieftaincy Affairs in Osun State, Mr Kolapo Alimi.

But should Afenifere want to align with any party, Alimi counselled the group to look for a party with some resemblance to the ideologies of Awolowo.

He said, “After all, Chief Obafemi Awolowo, Pa Abraham Adesanya, and Chief Bola Ige were all politicians. But when they spoke, the Yoruba people listened because they had the interest of the Yoruba people at heart.

“But if possible, Afenifere under the new leadership should remain apolitical. Whenever they speak, they should speak for the Yoruba nation and not for a party. It will give them credibility. If they do so, Yoruba people, even though they belong to different political parties, will see them as their own. When we have a common interest, it wouldn’t matter which party we belong to.

“For example, when Chief Moshood Abiola won the June 1993 election and was cheated, Chief Bola Ige took the matter up and fought against the cheating with passion. So let the Afenifere under the new leadership embrace all and be apolitical to a large extent.”

The President, Rights Monitoring Group & Centre for Convention on Democratic Integrity, Mr Olufemi Aduwo, noted that issues like restructuring and fiscal federalism would continue to be advocated for by Adebanjo and his team.

“The modern Afenifere is a sociocultural movement, and if that is the case, they should remain different and have a different agenda. If they would work with any party at all, the party must have the ideologies of the Afenifere, like federalism, and restructuring. But still, they should not join any party or campaign for them. They should have a focus for them to be credible,” Aduwo told Saturday PUNCH.

Meanwhile, on issues like federalism and restructuring, Afenifere has time and time again championed such causes. The group’s new leader, Adebanjo, has also been one of those who have been vocal in agitating for restructuring.

Aduwo said while the group continues to do so, bringing on board all Yoruba people might be one of the main challenges for Adebanjo leadership.

“But for it to be relevant, it must remain apolitical. The idea of supporting candidates during elections will make them look like a political organisation.

“In the last elections, the spokesperson for the group, Yinka Odumakin, was on the Atiku Abubakar Presidential Council. That’s bad! Because if let’s say a member of the All Progressives Congress hears Odunmakin talking on behalf of Afenifere, they would not listen to him.”

A security analyst in Abeokuta, Ogun State, Mr Femi Adeoti, said the invasion of Yorubaland by criminal herdsmen should take predominance by the new Afenifere leadership.

He said, “A lot is being done from what we are seeing to tackle the invasion of Yorubaland by insurgents disguising as herdsmen. Anyone who knows what is happening will know that the issue is beyond clashes between farmers and herdsmen. It’s an attempt at overpowering a people and taking over their land.

“I know the nature of the real herders to some extent because I once lived in the north. A Fulani man’s cultural way of life has been threatened due to existential problems spanning many years. The Fulani nomads don’t see any boundary on the land. They have absolutely no regard for national boundaries. They have routes from Mali all the way to the South, and then as the season changes, they start going upwards again all the way to the North. Those routes were handed over to them by their ancestors.

“But some years back, Nigeria’s population was around 40 million, but today, we are about 200 million, so the same land the Fulani used to graze their cattle had shrunk as people cultivated more and more land. So the area the Fulani man grazed last year, he’s passing through the same place now but it has become a farm.

“Similarly, the demand for the Fulani man’s cow has also increased. His ancestors were passing with 50 cows, now he’s passing with 300 cows, on smaller grazing fields. This is to tell us the origin of the conflict we have today.”

However, Adeoti said the Federal Government had failed to respond to the issues it should have seen coming.

“Due to the government’s failure to do what it should have done on time by possibly creating ranches, the Fulani herders now want to take control of people’s land by force. This is what is happening in the South-West,” the security analyst said.

Speaking of this threat, a day after Adebanjo was named the new Afenifere leader, several South-West leaders under the auspices of the Pan Yoruba Congress converged on Ibadan, Oyo State capital, to deliberate on the state of insecurity of the nation in general and the region in particular.

According to the Pan Yoruba Congress Committee Chairman, Sola Lawal, the Yoruba people decided at the meeting that it was determined not to stand idle and watch Yorubaland being desecrated.

“Only an arsonist allows a fire to burn and destroy. We will not permit strangers to abuse our hospitality and desecrate our hallowed land and our sacred spaces. Indeed, we invoke the ancient maledictions reserved for such malefactors. Our forests need no permission to swallow them,” a communiqué issued after the meeting read.

The communiqué was signed by an Afenifere chieftain and spokesperson for the Yoruba Summit Group, Mogaji Gboyega Adejumo.

The communiqué stated that the Yoruba nation was particularly exhausted by the narrative being painted of the farmer-herder conflict.

“Terrorists roam the land in the garb of herdsmen, killing, raping, kidnapping and maiming, with little or no reaction from constituted authority. A high-ranking government official declares that bandits are not criminals,” it read.

Furthermore, the communiqué stated that the Yoruba had decided to embark on a venture of massive resistance to the issue of insecurity – citing that the South-West Security Network, which operates by the name Amotekun, was formed for the purpose.

“The Yoruba are resolute in their fierce determination to pursue vigorously our own chosen destiny to be free men and women, and never to be second-class citizens in our own land and space,” it added.

In the meantime, the Secretary-General of the Yoruba Council of Elders, Dr Kunle Olajide, who was at the meeting where Fasoranti named Adebanjo as his successor, believed that the new Afenifere leader would perform his role.

“It was commendable of the immediate past leader of Afenifere to name Adebanjo, who is also one of the right-hand men of late Chief Obafemi Awolowo as his successor,” he said via a statement.

Also, Afenifere chieftain Senator Femi Okunrounmu said he was sure Adebanjo would bring his activist nature to bear in his new role.