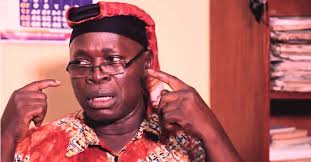 The Prof. Ishaq Akintola-led Muslim Rights Concern has asked the Federal High Court in Lagos to dismiss a suit seeking the removal of the Arabic inscriptions on naira notes.

MURIC and Akintola filed a counter-affidavit to the suit after the court granted their permission to be listed as defendants alongside the Central Bank of Nigeria, the Federal Government, the President and the Attorney General of the Federation, who were the original defendants in the suit.

A Lagos-based lawyer and rights activist, Chief Malcolm Omirhobo, who filed the suit before Justice Mohammed Liman, is contending that having Arabic inscriptions on the naira notes portrays Nigeria as an Islamic state, contrary to the country’s constitutional status of a secular state.

According to the lawyer, with the Arabic inscriptions on the naira notes, the CBN has been violating sections 10 and 55 of the Nigerian constitution, which make the country a secular state.

He wants the court to restrain the CBN from “further approving, printing and issuing naira notes with Arabic inscriptions, bearing in mind that Nigeria is a secular state.”

But in their 42-paragraph counter-affidavit seeking the dismissal of Omirhobo’s suit, the Registered Trustees of MURIC and Akintola said the lawyer’s action was motivated by “religious bigotry, religious intolerance and outright hatred for Islam.”

Contrary to Omirhobo’s argument, MURIC and Akintola said there was nowhere in the constitution where it was stated that Nigeria is a secular state.

They also argued that Arabic is just a language and not synonymous with Islam, saying the Bible, which is the Christian holy book, is printed in Arabic language in Israel, Egypt, Palestine, Lybia, Syria and among other countries.

Opposing Omirhobo’s prayer that the Arabic inscriptions on naira notes should be replaced with English, MURIC and Akintola said there was no law making English Nigeria’s official language.

They further argued that if the sign of the cross, synonymous with Christianity, could be used on government-owned hospitals and ambulances, there was no reason why Arabic shouldn’t be permitted on naira notes.

They said should Omirhobo’s suit succeed, the CBN and the Federal Government “will incur colossal sums of money to discard the currencies with Arabic inscription and print new Nigerian currencies.”

But Omirhobo, reacting through a further affidavit, said the counter-affidavit by MURIC and Akintola was filed in bad faith and should be disregarded by the court.