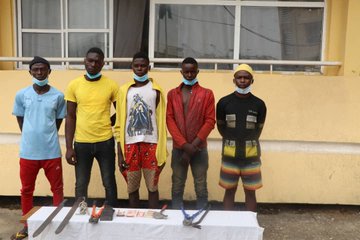 This was disclosed in a statement signed by the Police Public Relations Officer, ASP Yusuf Mariam, for the Commissioner of Police, FCT Police Command.

They were arrested by police operatives from Mpape Division during a routine raid on Monday, March 15, 2021.

The statement said, “The suspects met their waterloo while attempting to break into a Container, they confessed to being members of a 12-man robbery gang terrorizing Mpape axis. Exhibits recovered are two cutlasses, two iron cutter, one iron bar, one axe, one rope and a wallet containing counterfeit currency notes. Effort is underway to arrest other members of the gang.

“Relatedly, Police Operatives from Life-Camp Division on Sunday 14th March 2021 arrested one Emmanuel Idowu ‘m’ 61years and Ede Chinedu ‘m’ 27 years along Dappe, Life-Camp axis during a routine patrol for being in illegal possession of a firearm while one Bright Effiong ‘m’ 37 years was arrested with dried leaves suspected to be Indian hemp. Exhibits recovered are one locally made pistol and one unexpended cartridge.

“In another development, Police Operatives from Gwarinpa Division on Monday 15th March 2021 arrested one Musa Bari ‘m’ 20 years and Harisu Aminu ‘m’ 18 years for peddling drugs at Kado-Biko axis of Gwarinpa. Exhibits recovered are one bottle of DSP syrup with codeine, one bottle of Barcadin Syrup with codeine, one hundred and thirty pieces dizapam tablets, 30 pieces of Hypnox Tablets, five hundred pieces of Valium D5 Tablets, 242 pieces of Exxol Tablets and wraps of dried leaves suspected to be Indian hemp.”

The Command said all the suspects will be arraigned in court upon conclusion of investigation.