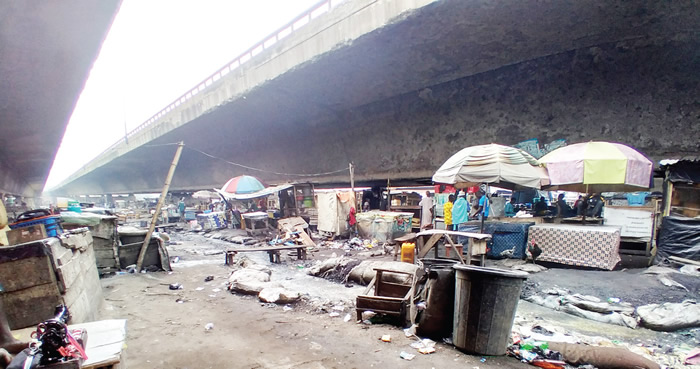 In this report by OLUWATOSIN OMOJUYIGBE, some residents of Ogun communities share their security concerns about homeless migrants from the northern part of the country occupying underbridges in the areas

To a keen observer of border communities in Ogun State – Arepo, Magboro, Ibafo and Kara – there has been a surge of migrants from the northern part of the country who have no jobs or do menial work to survive.

Residents are not bothered by their coming to the communities because they are Nigerians, but thousands of these internal migrants do not have places to sleep. As a result, they have converted bridges in the areas into their homes, thus raising security concerns among the residents.

A resident of Arepo, Mrs Aduke Ade, who expressed concern about the identities of these migrants, said their continuous living under bridges was a potential security threat to others in the area.

She said, “I have always had my reservations about these people, with the way they have turned the under bridge into their permanent abode. They, especially their children, always constitute a public nuisance to the extent that if you are not careful while driving, you will almost knock them down while they’re running after vehicles to beg for money.

“I had at one point called the head of the security unit of the association in Arepo to ask why they would allow them to stay there because you don’t know their identities. Any some of them could be robbers and there is nobody that can identify them.

“The government needs to evacuate them from the under bridges so we can always have peace of mind when we pass through the place at any time of the day.”

Contrary to Aduke’s concern, another resident in the area, Bola Oodua, told our correspondent that she was not bothered about the migrants living under bridges as she saw it as their way of life.

She said, “I feel they see living under the bridge, sleeping in front of shops as a norm and they have found that place as their comfort zone. These people have a vast area of land that they could use for farming in their villages but they prefer to come to cities to beg because they feel the grass is greener on this side.

“As a resident, I’m not bothered about them staying there because I feel they are comfortable there and a lot of people go there to give them food and money.”

“But if these people have affiliations with killer herdsmen, then the environment is not safe, the government needs to find a way of getting them back to where they came from or find a place like an IDP (internally displaced persons) camp to settle them.”

A resident of Magboro, Oluwaseun Hassan, who has experienced theft in the hands of one of the internal migrants, said they posed security, health and harassment threats to the residents of the area.

Hassan, a lawyer, said he preferred crossing the expressway to passing through the under bridge whenever it was late.

He stated, “The highest concern is the security threat they pose to residents of Magboro because whenever it’s late in the night, you get scared to pass under the bridge; people prefer to cross the expressway for fear of being stabbed or get robbed because once they commit a crime, they will flee the area and because they are not documented, you cannot find them.

“I once had an encounter with them when my mum had a shop at the bus stop. My dad used to allow them to sleep at the back of the shop because they don’t have where to stay and they loiter around. There was a time I was charging my phone in the shop and left it in the custody of my brother and went home but one of them who came to charge his phone in the shop distracted my brother and stole my phone.When we started looking for him, he had travelled back to his state.

Hassan, who urged the state government to construct camps for the migrants, also called for their documentation.

Another resident of Magboro, who identified herself simply as Toyosi, told our correspondent that though she had not had a personal encounter with the homeless internal migrants staying under bridges, she knew someone who was attacked.

She said, “They can be violent at times because they have different kinds of weapons with them under the bridge. If the government should go there and search them, you will be amazed at the weapons they will see.”

“Their children also embarrass people when they run after them to beg for money. They make you feel like you don’t want to help them. At times, I may not have enough money in my purse but these kids will start pestering me till I start feeling guilty.”

We stay under bridges because we can’t afford to rent decent accommodation, we are not criminals–Internal migrants

But some of the affected northerners in separate interviews with The PUNCH explained why they had made under bridges their homes. Twenty-year-old Usman Yakubu was full of great expectation by the time he relocated from Zamfara State to Ogun State

Back home, he was fed with sweet stories about life in the South-West,

Encouraged by such tales, Yakubu left his village in search of greener pasture but unfortunately, three years after arriving in the city, he has not been able to afford a single room accommodation. He sleeps under one of the bridges in the community.

“Some of our brothers that came down here earlier had told us that there was money in the city. So I decided to come and hustle to make money but to my amazement, I have not been able to see the kind of money that was described to us. I go out in the morning to repair shoes and the little money I make from it is what I use to take care of myself which is not enough to rent an apartment,” he said.

When our correspondent confronted Yakubu with the security concerns of the residents, he said, “We’re not criminals we have our jobs. Most people you see under this bridge sleep here because we don’t have the money to rent an apartment but if the government can help us, we will be grateful.”

Ali Suleiman, who came from Jigawa, was also disappointed after the tale of making it big in the city was not realised.

He said, “I had wanted to come and work here, make as much money so that I could go back to my village to meet my family but when I got here, I realised that it was not as easy as we were told. I work as a scavenger and the money I make is not enough for me not to talk about sending some home.”

A security expert, Ona Ekhomu, who shared in the security concerns of the residents, noted that there was nothing they could do as long as the constitution allowed Nigerians to live in any part of the country.

He, however, added that the state government could pass a law restricting people from sleeping under the bridges on the grounds of public safety reasons.

He said, “The constitution guarantees free movement, free association, and that any Nigerian could live anywhere they like as long as they abide by local laws and as long as these northerners are not breaking laws or trespassing on any private or public properties, then there is nothing wrong with that.

“Since the constitution has allowed any Nigerian to live anywhere, we cannot derogate from the right of northerners to sleep anywhere or live anywhere in the country. Although it is not okay security-wise, the residents can do little or nothing to these people unless they cause trouble or there’s a restriction of movement within some certain areas.

“They are well within their rights because the under bridges are public property. Unless the state government makes a law or ordinance that the area cannot be accessible for public safety reasons or provide a place for them, there is nothing the residents can do.”

The Chief Press Secretary to the Ogun State Governor, Kunle Somorin, when contacted for the state government’s reaction to the concerns of the residents, said he was not aware of the matter.

He said, “The state government did not give anybody permission to sleep under the bridge. I’m not aware of what you’re talking about; let me do my check and revert. You have raised the security concern; let me find out what you have said because I don’t want to answer a hypothetical question.” ,,